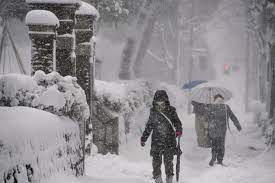 Much of the country’s west coast as well as the northern region of Hokkaido have seen persistent heavy snow in recent days.

Some areas have seen almost a metre of snowfall in 24 hours, including the town of Oguni in northeastern Yamagata region, local media said.

Japan’s weather agency has warned residents in the affected regions to avoid travel where possible, after cars got stuck on roads in heavy snow.

Government officials said Monday that 17 people have been killed and dozens more injured in the snow since December 17.

National broadcaster NHK reported the dead included a man who fell from a roof while clearing snow and a woman found dead of suspected carbon monoxide poisoning in a car.

In Hokkaido, tens of thousands of homes have lost electricity in recent days as the snow brought down power lines, though most connections have now been restored.

The heavy snowfall is expected to ease from Monday.