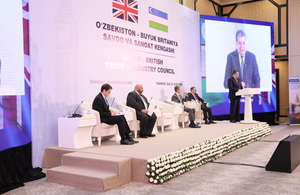 TASHKENT: UBTIC brought together senior policymakers and business leaders from the UK and Uzbekistan to network and discuss bilateral trade.

The Uzbek-British Trade and Industry Council (UBTIC) is an annual forum to discuss opportunities to promote and increase bilateral trade and investment, which was established by the governments of the UK and Uzbekistan in 1994. This year it was held in Tashkent as an in-person event.

The event was opened by Deputy Minister of Investments and Foreign Trade of Uzbekistan, Badriddin Abidov and the UK’s Trade Commissioner for Eastern Europe and Central Asia, Kenan Poleo. They spoke about the current state of bilateral trade, as well as opportunities the Uzbek market presents to the British businesses and future prospects.

Director General of the Department for International Trade of the UK, Andrew Mitchell CMG, announced new trade development funding, including further support for Uzbekistan’s WTO accession. At the end of the opening session the parties signed a bilateral Action Plan.

The programme also included sessions on the following four sectors:

Companies such as Arup, Standard Chartered, Allen & Overy, Hudson Sandler, De Montfort University and University of Cambridge represented the UK side during these sessions.

Fabian Hartwell and Karen Johnson, DIT Trade Policy Advisers held a workshop on the Generalised Scheme of Preferences. In 2021, Uzbekistan became the first country admitted into the UK’s Enhanced Framework under its independent Generalised Scheme of Preferences (GSP). This allowed 91% of goods to be exported to the UK at zero tariff rate. The UK has now announced that the “Developing Countries Trading Scheme” which will replace the UK’s current GSP in 2023. The session covered changes regarding the UK’s preferential trading scheme and its conditions, tariffs, goods graduation, and requirements for rules of origin.

Total trade between the UK and Uzbekistan doubled in 2021 and is now worth just under $0.5 billion. There is still potential to double it again over the next few years. 126 British business delegates attended UBTIC, representing 73 different British companies.

I am immensely proud of the work that our two countries have done together, but we must not become complacent.  UBTIC provides a perfect platform for us to continue to build and deepen our trading relationship; working together on Uzbekistan’s WTO accession, expanding our support for economic and political reforms and working together to maximise our GSP (DCTS)