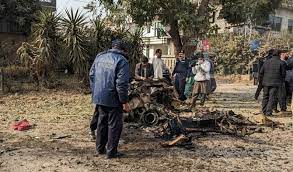 ISLAMABAD: Two people including a policeman were martyred and 10 others injured when a suicide blast rocked the Islamabad’s I-10 Sector on Friday.

A spokesman of Islamabad police confirmed that it was a suicide blast, saying there was a high alert in the federal capital, and patrolling and strict checking of vehicles was underway.

When a suspicious taxi was signalled to stop at a police post, the bomber riding in the vehicle exploded his suicide vest martyring two people and inuring 10 others including four cops.

The intelligence agencies, rescue and police teams have rushed to the blast site and cordoned off the area.

According to police, the blast took place inside the taxi and it was so intense that the vehicle was completely destroyed by it.

The martyred cop was identified as Head Constable Adeel Hussain. The police also found the mobile phone of the dead bomber.

The registration number of the taxi in which the suicide blast occurred was LEI-1793 and it belonged to Sajjad Haider Shah, resident of Chakwal.

Prime Minister Shehbaz Sharif, while strongly condemning the suicide blast in Islamabad, has sought a report from the police high-ups.

In a statement, the Prime Minister paid homage to the martyred Police Constable Adeel Hussain, resident of Pakpattan.

Shehbaz Sharif said the entire nation salutes their valiant police personnel, who sacrificed lives and stopped the terrorists. He said the nation will continue its fight against complete elimination of terrorism.

The Prime Minister also expressed sympathies with the injured and directed to provide best treatment facilities to them.

He also directed the IG Police to confer awards on the police personnel for their extraordinary bravery.