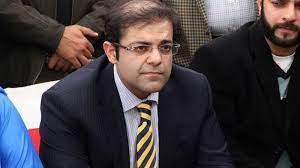 LAHORE (Agencies): An accountability court in Lahore has extended the interim bail of Suleman Shehbaz, son of Prime Minister Shehbaz Sharif, in a money laundering case.

Suleman, who returned to Pakistan earlier this month, was granted bail after he filed a petition for pre-arrest bail in the reference filed by the National Accountability Bureau (NAB) in 2020. As per details, Suleman Shehbaz, son of Prime Minister Shehbaz Sharif appeared before the court. Suleman Shehbaz’s counsel asked the court to grant them some time to answer the National Accountability Bureau (NAB) questions.

The court granted him interim pre-arrest bail till January 7 against surety bonds worth Rs500,000. The court also barred NAB from arresting him. It is worth mentioning here that the National Accountability Bureau (NAB) had written a letter to the UK government to hand over Suleman, who was wanted by the accountability watchdog under money laundering charges and the Telegraphic Transfer scandal. An accountability court in 2019 also issued non-bailable warrants for the arrest of Suleman Shehbaz in a money laundering case.