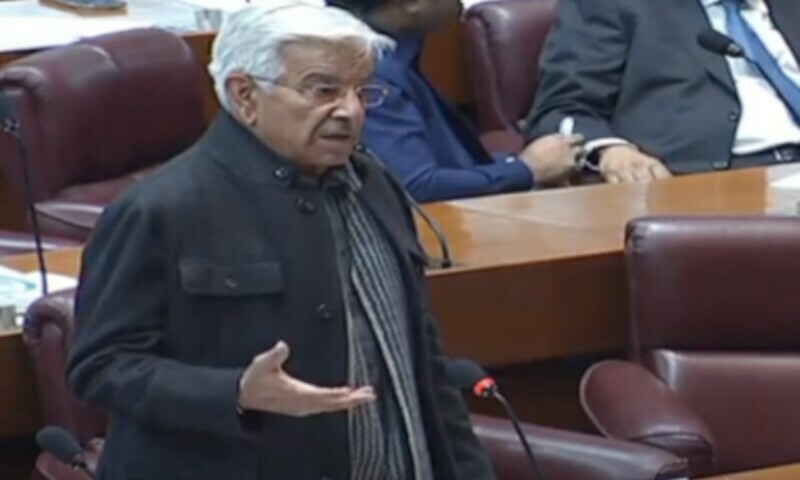 ISLAMABAD (INP): Minister for Defence Khawaja Muhammad Asif has claimed that Afghanistan admitting its mistake over unprovoked and indiscriminate firing by its forces at Chaman border of Balochistan resultanting in dead of seven civilians has tendered applogy.
Speaking on the Floor of National Assembly on Monday, he said that during a border security committee meeting, the Afghan side admitted its fault besides assurance to avoid such incident in future.
Khawaja Asif said that the first firing was carried out during the repair of the fence on the border but the Afghan forces later attacked with heavy artilleries resulting in martyrdom of seven civilians. He said that Pakistani armed forces resorting to unprovoked firing targeted the Afghan post, which resulted in the killings of their soldiers.
“Pakistan is a well-wisher of Afghanistan and desires resolution of their internal matters. We will continue to extend cooperation for peace and stability in Afghanistan,” the defence minister said, adding that this will open vistas of economic and trade cooperation in the region. He termed the recent visit of Minister of State for Foreign Affairs Hina Rabbani Khar to Kabul for talks a symbolic one and ‘proud moment’ for Pakistan.
Khawaja Asif said that during Hina’s visit, no objection was raised from Afghan leadership, adding that the Afghan leaders held talks with the Minister of State for Foreign Affairs. “Performance should be judged instead of gender,” he pointed out.
A day earlier, according to Inter-Services Public Relations (ISPR) at least six Pakistani civilians embraced martyrdom and 17 other sustained injuries due to ‘unprovoked and indiscriminate’ firing by Afghan border forces in Balochistan’s Chaman district.