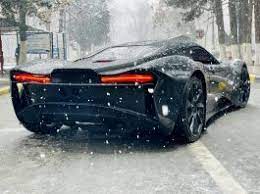 KABUL (Khaama Press): Despite recent restrictions barring women from public life by the IEA authorities, the development of a supercar called ‘Mada 9’ puts the nation on the map for different reasons this time.
The racer car is described as ‘the country’s Bugatti’ after it went viral on social media. The engineering team behind Mada 9 put a test of the racer on snowy roads in Kabul on December 29, depicting the car’s superiority and that it is powered with all-wheel drive.
Muhammed Reza Ahmadi, the CEO of Entop auto studio in Afghanistan, and his team members have designed and produced the first Afghanistan-made sports car for the Technical Vocational Education and Innovation Center of Afghanistan.
The designing team led by Muhammad Reza Ahmadi decides to display the racer in the upcoming Qatar Exhibition 2023, intended to catch the attention of the world’s leading automobile companies and investors.
“We thank the authorities of the Islamic Emirate of Afghanistan (IEA) and the people for their immense support towards making this project successful. We also suggest the national investors provide our team the financial support and invest in this mega project in the manufacturing stage,” Muhammad Reza Ahmadi said.
The Mada 9 is a daring effort with the potential to be a defining moment for the car industry in war-torn Afghanistan. The country so far has nothing in the automotive industry, however, the successful implementation of this project can be a turning point, with the possibility of potential investors considering the project and Afghanistan a lucrative market in the long term.
This comes as foreign investment in Afghanistan is currently zero, primarily due to the prolonged conflict, and political and economic instability in the country.