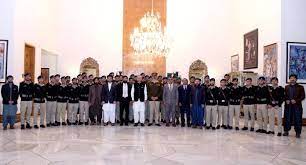 ISLAMABAD: President Dr Arif Alvi on Monday urged the student delegation from Balochistan to continue to gain knowledge and acquire marketable skills by tapping traditional and online resources of knowledge. Talking to the students and staff of Cadet College Qilla Saifullah here at the Aiwan-e-Sadr, he stressed using the acquired knowledge to serve the country and its people with compassion and observing moral and ethical values.

President Alvi said quality leadership, timely decisions, learning from the past, benchmarking the best and proven practices, and overcoming issues and crises by setting Key Performance Indicators (KPIs) would help the country to overcome its financial and economic issues.

He said knowledge and continuous learning were very important to build a comprehensive, well-groomed and balanced personality.
The president said Pakistan had great potential in terms of both its natural and human resources.

He said Pakistan created a nuclear deterrent in a short period to counter the hugely disproportional conventional weapons of a neighbouring country.

He said Pakistan also succeeded in defeating the scourge of terrorism and mentioned hosting four million Afghan refugees.
He said that tangible and time-bound steps needed to be taken to bring 22 million out-of-school children into schools, besides ensuring the inclusion of 10 percent differently-abled population (DAPs) into the mainstream as useful and productive citizens.

The president said that Pakistan was blessed with a vast coastline but unfortunately our exports of fisheries and related products were low compared to other countries.

He said the stakeholders in the higher education system should make tangible efforts to increase the number of students enrolled in higher institutions as currently only 9 percent of our students had access to higher education compared to 20 to 25 percent in our neighbouring countries.

The president also called upon the college management to train cadets in new technology trends like the Internet of Things, Robotics, Virtual Reality and Artificial Intelligence, which were going to have vast applications in in every sphere of life. The establishment of Cadet College Killa Saifullah was announced on 18th December 2004. The College became functional on 17th April 2009. The College’s 90 seats are given to the students from the Province of Balochistan with a token representation of other provinces. (APP)