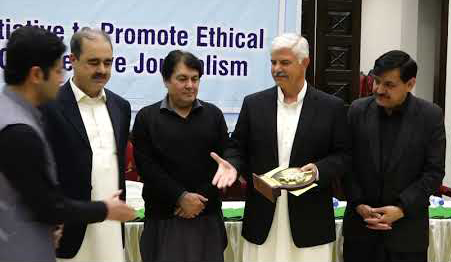 F.P. Report
PESHAWAR: The Amir Ahmad Siddiqui Media Awards ceremony was held here at the Chief Minister House, Peshawar in which Chief Minister Mahmood Khan distributed Awards and cash prizes among the journalists for their outstanding performance in various categories in the field of journalism. He also gave life time achievement award to internationally acclaimed Journalist Rahim Ullah Yousafzai late, acknowledging his unprecedented services in journalism, which was received by his son Arshad Yousafzai.
The ceremony was attended by Special Assistant to Chief Minister for Information and Public Relations Barrister Muhammad Ali Saif, Secretary Information Arshad Khan, Chairman Judges Committee of the Awards and Senior Journalist Ismail Khan, Chairman Department of Journalism and Mass Communication UoP Dr. Faiz Ullah Jan, President Peshawar Press Club M.Riaz and other senior journalists.
Addressing the ceremony, the Chief Minister termed the Ameer Ahmed Siddiqui Media Awards as an encouraging initiative which is playing an important role in the promotion of ethical and competitive journalism in the province.
The Chief Minister paid rich tribute to the services of late Amir Ahmed Siddiqui, Rahimullah Yousafzai and other senior journalists adding that Rahimullah Yousafzai not only had a key role in promoting positive journalism but was also considered an authority on Afghan Affairs.
“I consider late Rahimullah Yousafzai as my teacher and I used to consult him on various issues as a Chief Minister”, Mahmood Khan. The Chief Minister urged upon younger journalists to follow the footsteps of legendary journalists like Rahimullah Yousafzai.
The Chief Minister on the occasion announced cash prize worth Rs 50 thousand for each award winner besides announcing the attribution of a Government hospital in the native village of late Rahimullah Yousafzai in his name. Touching upon the importance of journalism and freedom of speech, the chief minister said that an independent media and positive journalism are indispensable for democracy and media has always played an exemplary role in strengthening democratic norms.
He said that Media acts as an interface between common citizens and the Government adding that the media and provincial government have enjoyed cordial relations during the last four years which will be maintained in the future.