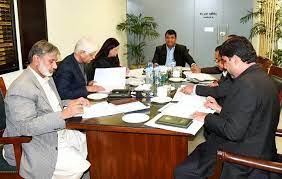 Adviser to the Prime Minister expressed satisfaction over the overall performance of the officers and other employees of the division. Secretary National Heritage and Culture Division Farina Mazhar and Senior Joint Secretary Muhammad Bilal were also present in the meeting. Engineer Amir Muqam directed the concerned departments to expedite the progress on initiatives by the present government in an efficient manner. He directed that the process for the appointment of departmental heads on vacant posts should be prioritised.

The adviser pledged that all possible measures would be taken for improving the efficiency of the division and attached departments. In the meeting, Engineer Amir Muqam was briefed on the progress on various projects and initiatives.

Later, the Advisor to the Prime Minister held meetings with delegations from the whole country, especially KP, at his Islamabad office, listened to their problems and issued orders on the spot regarding many of their issues.