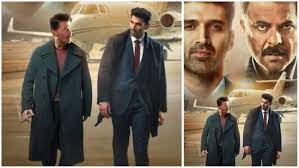 MUMBAI: Bollywood actor Anil Kapoor has unveiled the first look of his upcoming web series “The Night Manager”. The Hotstar Special also stars Aditya Roy Kapur and is the official Hindi remake of the British TV series of the same name.

The “Beta” star will step into the shoes of Hugh Laurie, Aditya Roy Kapur take up the role originally played by Tom Hiddleston. It will be streaming on Disney+ Hotstar.

The first look motion poster shows a blast behind an aeroplane as Anil and Aditya Roy Kapur are seen walking away from it. Sharing it and dropping a hint about the plot, Anil wrote on Instagram, “Duniya ke sabse dangerous arms dealer ko rokne ke liye there is only one weapon – ek hotel ka night manager (there is only one weapon to stop the most dangerous arms dealer of the world and that is a hotel’s night manager).”

Anil’s daughter and film producer Rhea Kapoor called it “insane” and also dropped fire emojis in the comments section. Varun Dhawan wrote, “Excited for this one way to go boyzzzzzzss.” A fan wrote, “I’ll watch it for you. I just love Tom Hiddleston in this and Hugh too.” Another said, “This is going to be epic.” However, a comment also read: “Kuch to original bana lo (make atleast something original).”

Talking about stepping into Tom Hiddleston’s shoes, the “Aashiqui 2” star said in an interview, “I love Tom Hiddleston and I love the series as well. It’s a beautifully written show and the part is complex and exciting. It’s a great opportunity for me to be able to sink my teeth into that role. Tom has played the part so well so it was important for me to find my own way into it. When you do something that’s already been done the challenge is to give that part your own direction and identity. Hopefully we have managed to do that here.”

Anil Kapoor will be seen as a weapons dealer who disguises himself as a business tycoon. Aditya will be seen as the night manager of a luxury hotel and a former soldier. Sobhita Dhulipala has stepped into the shoes of Olivia Colman who played Angela Burr and lead character Jonathan Pine (Tom Hiddleston’s) recruiter.

Anil had wrapped up the shoot of the show in September last year. Dropping hints about his character named Shelly, he wrote along with a few monochrome pics of himself, “And #TheNightManagerofIndia is off duty! #Thatsawrap for Shailendra Rungta a.k.a Shelly! Based on: The Night Manager; by John le Carre.”