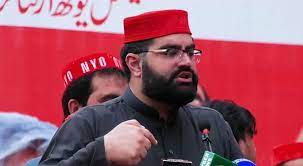 PESHAWAR: Provincial president ANP Khyber Pakhtunkhwa, Aimal Wali Khan has welcomed the likely dissolution of KP Assembly and said that the people of the province will be got rid of the champions of change.

In a statement issued here on Saturday, he said that the people of the province will get rid of the PTI government, which had spent the whole last day on begging before opposition for moving a non-confidence motion. But, we have made it clear on them that we will not tolerate the thieves of the public mandate anymore and today is day of liberation from them.

He said that after losing power, the PTI leaders will be got aware of their real position, saying vacation of stay order in BRT case, Malam Jabba, Billion Tree Tsunami and other scams are sufficient for taking them to their logical end.

Aimal Wali Khan alleged that for the last two decades PTI has used the resources of the Khyber Pakhtunkhwa in favour of Imran Khan.
He said that during the period from 2008-13, they have had cleared all circular debts of the province while loans were restricted at Rs.97 billion. He said that during the PTI governments foreign debts have crossed the figure of 987 billion rupees and after next two months, the province will even not having the resources to pay the salaries to employees. (APP)