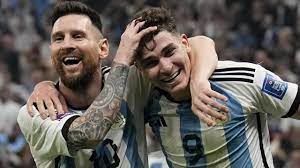 DOHA (AFP): Julian Alvarez has been a revelation for Argentina at the World Cup but back in his tiny home village the player nicknamed “Spider” is celebrated for his humility and hailed as a “hero” and “ambassador”.

Having started the Qatar tournament as a substitute, Alvarez has forced his way into the starting line-up through a series of match-winning displays that have seen him bag four goals.

The 22-year-old is a near certain to start — and perhaps star — in Sunday’s final against France.

“At seven years old he was a very supportive, responsible and studious boy, given to help his companions,” Patricia Magnino, one of Alvarez’s teachers at the Rivera Indarte primary school in Calchin, told AFP.

Another of his former teachers, Graciela De Barberis added: “He always stood out for his humility and speaking little. Dreams come true if you work for them.”

Calchin, which means ‘salty spot’ in the local vernacular, is a humble village of 3,000 people located in the northeast of the rich rural and industrial province of Cordoba.

At the entrance to the village and on the school walls there are billboards praising “Julian, the pride of Calchin,” alongside depictions of large spiders.

Every building in the grid-like village is a single storey, with roads lined with trees such as white quebrachos, pines, carobs and chanares.

It is deathly quiet in the village, aside from the sounds of a few metal workshops. The surrounding area is fields of grain and livestock.

Alvarez was nicknamed the spider because of his ability to control a football and send it into the back of the net, like a spider catching a fly and confining it to its web.

His two goals in Tuesday’s 3-0 quarter-final victory over Croatia added to previous strikes against Poland and Australia.

He began playing for his local Club Atletico Calchin whose stadium has just one main stand which can hold only 150 people.

On Sunday, Alvarez will play in front of almost 89,000 fans in Doha’s Lusail stadium.

The concrete stand sticks out amongst the vast Argentine pampa in this humid region, 800 kilometers from Buenos Aires.

Calchin play in the same colors as River Plate, the club that launched Alvarez’s professional career before he moved to Manchester City.

Despite his big-money switch to the English Premier League, the richest competition in the world, Alvarez remains attached to his home village.

A few years ago he bought a truck for his first coach, Rafael Varas, to help with his job as a delivery man.

“It was a huge gesture by Julian to give me the truck. I wasn’t expecting it but knowing the person he is, I expected nothing less,” Varas said in a recent television interview.

“But his strength was sports, where he shone. I adore him.”

She remembers mischievously joking with Alvarez that journalists would come looking to interview him, “and he became embarrassed.”

“He is the best ambassador we have. He is an example for our children, not just for his qualities as a player but also as a person,” said local mayor Claudio Gorgerino.

Alvarez’s godfather Raul Campoli says “football was always the priority for Julian” but he was also top of his class. “He was the school flag bearer.”

Still, it was his goals that really made him stand out.

“With Julian we had the ace of spades,” said Tomas Romero, 23, a friend and former team-mate.

“He’s a hero, he’s done so much for our village to be recognized throughout the world.”

Romero says he remembers seeing Alvarez score a goal with a ‘rabona’ — a football trick where a player kicks the ball from behind his standing leg.

“He left everyone with their mouths wide open,” said Romero.