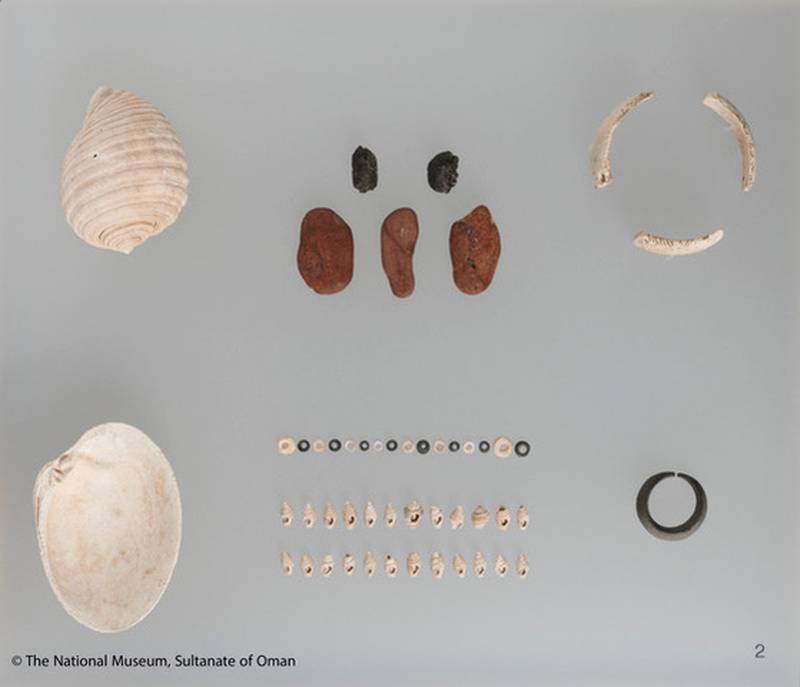 A collection of more than 100 artefacts, tracing the history of Omani civilisation from the Stone, Bronze and Iron Ages until the rise of Islam, are on display as part of a new exhibition at the Sharjah Archaeology Museum.

Titled Omani Civilisation: Origin and Development, the exhibition opens on Wednesday and will run until June. It marks the first time the artefacts are being displayed outside the sultanate.

The works include fishing gear, weapons, clay and stone pots, ornaments, stamps, farming equipment, as well as jewellery including a gold necklace from the period between 300 BC and 400 AD.

The exhibition is held in partnership with the National Museum of Oman and highlights similarities between archaeological finds in the sultanate and those at Sharjah Archaeology Museum.

Archaeological findings in Oman have been paramount to understanding the beginning of settled life in the Arabian Peninsula. The National Museum in Oman, which was inaugurated in 2013, showcases many of these rare, enlightening findings, housing more than 7,000 objects. The exhibition is the first collaboration between Sharjah Archaeology Museum and the National Museum in Oman.

“The collection reveals the historical ties between the two countries, while shedding light on the life of the original inhabitants and settlers in the Arabian Peninsula,” Manal Ataya, director general of Sharjah Museums Authority, said.

A number of events related to the topic will be accompanying the exhibition, including workshops, as well as interactive and educational activities.