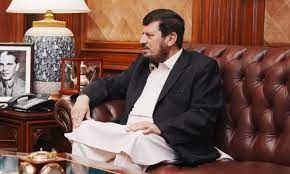 F.P. Report
PESHAWAR: Khyber Pakhtunkhwa Governor Ghulam Ali on Monday said that the assemblies would complete tenure and there was no truth in dissolution of any assembly before time.
Talking to media outside Peshawar Press Club, he said that dissolution of assemblies was not a joke especially in the present situation when the country was passing through a challenging economic situation, adding that all the political parties of the country through the plate-form of PDM would steer the country on path of economic development.
To a question about dissolution of Punjab and KP assemblies as hinted by Imran Khan, the Governor said that Imran Khan was not a man of words, he had passed his time and should have to wait for the general elections. Khyber Pakhtunkhwa Governor Ghulam Ali said that it was not only Pakistan which was confronting economic challenges rather the developed countries were also facing similar situation.
To another question the Khyber Pakhtunkhwa Governor Ghulam Ali rejected chances of early elections and said that general elections would be held after completion of the term by the assemblies. The Governor also rejected differences with the provincial government on any issue and said that he was working under the constitutional ambit. Regarding joining of JUIF candidates of PTI and other political parties, he said that it was the beauty of democracy and there was nothing new or astonishing about it.