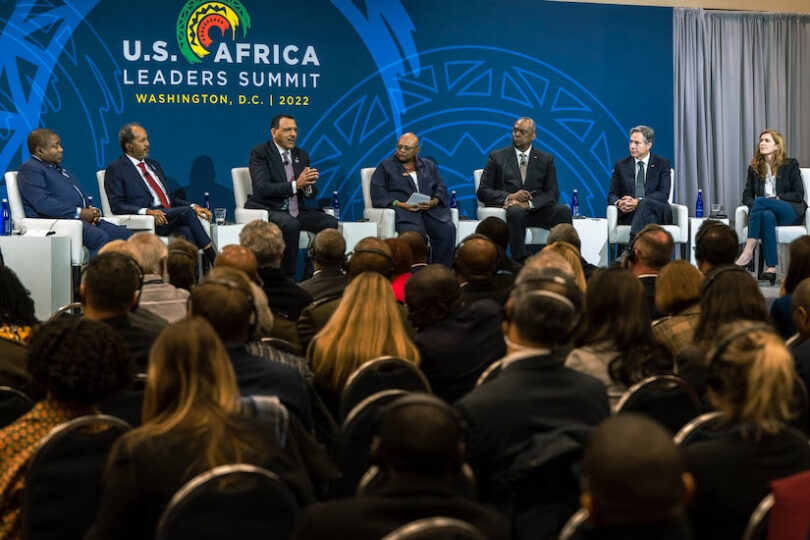 “The first thing that we always want to do from a department standpoint is develop the right relationships that will be conducive to promoting stability and security,” said Lloyd J. Austin III. “And as we develop those relationships, we want to listen.”

Austin spoke Tuesday as the host of the Peace, Security and Governance Forum at the White House-led U.S.-Africa Leaders Summit in Washington, D.C. The forum was co-hosted by Secretary of State Antony Blinken and Samantha Power, administrator of the U.S. Agency for International Development.

“We want to listen to what’s important to the leaders in the region and the specific countries,” Austin said. “And we want to understand what’s really important to you.”

The U.S. has military personnel based in all three of those nations, Austin said, and he thanked the leaders for allowing the U.S. to partner there with their forces to advance mutual security internists.

“We want to make sure that we are doing the things to develop and empower your security forces and help you work on your security architecture in ways that you think benefit you and that certainly will promote regional stability,” Austin said.

The secretary also addressed climate change, and how the U.S. Defense Department has the challenges posed by climate change written into its own defense policies.

“One of the things that we have done in terms of the United States is we have addressed climate change in our National Defense Strategy, which is our guiding document,” he said. “And as we interact with other countries, we certainly encourage them to do the same thing.”

Climate change, Austin said, is causing both mass migration and a greater competition for resources.

“We had a great discussion this morning with the president of Niger about the impact of climate change, and it’s very interesting to hear his insights because they directly match our insights and our concerns,” Austin said.

Central to how the U.S. operates in Africa is its “3D” approach. That approach leans on defense, development and diplomacy to address the root causes of instability on the continent. It means that U.S. relations in Africa are not based only on defense and the military.

“It’s fascinating to hear our guests, each one of them makes that case, that … providing additional security alone won’t solve the problem,” Austin said. “We really have to do the right things in terms of diplomacy and providing assistance and aid to create the long-standing conditions that we’re looking for — the long-standing peace and stability.”

Military efforts provided by the Defense Department, in partnership with the defense forces of African nations are important, Austin said. That work sets the conditions for the even more important follow-on work, such as that provided by the U.S. Agency for International Development and the State Department.

“I don’t ever want to see a day when we’re not resourcing our diplomats to the full extent that they need to be resourced,” he said. “Because that’s going to make me buy more bullets. Because, you know, you can’t solve every problem with a military solution. And certainly, if you’re not addressing the long-standing, long-term issues, whatever solution you put into place will not … prevail.”

When the U.S. partners with African nations, Austin said, military power is not the only tool in play — it’s always coupled with development and diplomacy.

“This is a way of life for us,” he said. “And we think it’s a way that … you have to do business, and it’s certainly the approach we’re taking on the continent. And I want to applaud all the leaders who are here who have embraced that concept as well.”