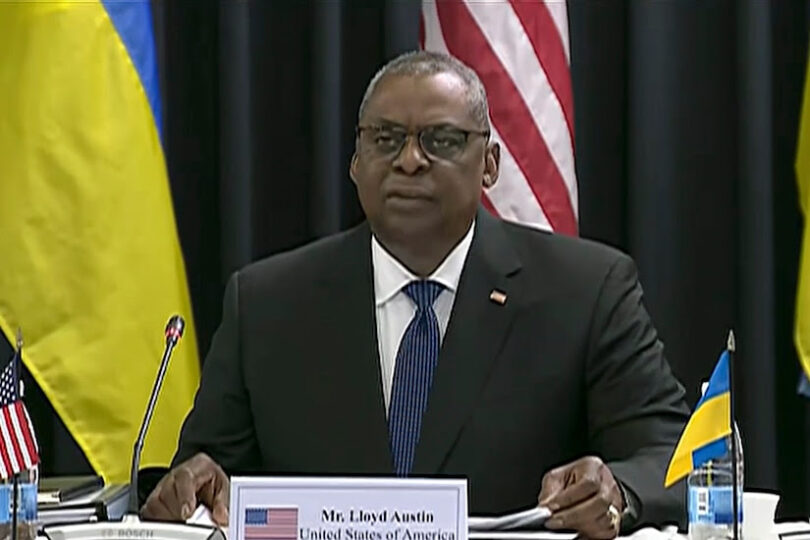 WASHINGTON: Now is not the time to slack off. Now is the time to dig deep and aid Ukraine in its existential struggle against Russian invaders, Secretary of Defense Lloyd J. Austin III told members of the Ukraine Defense Contact Group today.

The eighth meeting at Ramstein Air Base, Germany, brought together representatives from more than 50 nations and organizations to determine the best way to get the military capabilities that Ukraine needs to repel Russian forces from their sovereign territory.

Ukrainian President Volodymyr Zelenskyy addressed the contact group as the meeting opened and the delegates received a briefing from Ukrainian military officials on the situation on the ground and what they believe they need to continue operations.

It is the first time Zelenskyy addressed the contact group and he thanked the assembled delegates for their efforts. He said their military capabilities are already making a difference on the frontlines in Ukraine.

“But do we have a lot of time,” the president asked. “No. Terror does not allow for discussion. The terror which burns city after city becomes insolent when I tell that defenders of freedom run out of weapons against it. The war started by Russia does not allow delays.”

The president called on the contact group to speed up deliberations. “I’m truly grateful to all of you for the weapons you have provided,” he said. “Every unit helps to save our people from terror, but time remains a Russian weapon.”

Zelenskyy stressed he was speaking to them as ministers of defense. He said they defend “everything that makes our world free, civilized.”

He said the ministers serve a world that values freedom and asked them to remember “the world your parents dreamed of for you. And I’m addressing those who themselves dream of a certain world for their children. It is time now to protect those dreams.”

“People who dream, that freedom will be protected for Ukraine for all of Europe for each and every coalition country,” Zelenskyy said. “It is about people who believe that evil and hatred will always lose. The Kremlin must lose.”

Austin, who chairs the Contact Group, began the meeting detailing the latest tranche of weapons and supplies the United States is pledging to Ukraine. This is a $2.5 billion set of equipment and ammunition that brings the total U.S. contribution to the effort to $26.7 billion since the Russian invasion began Feb. 24, 2022.

“Our new package provides even more air defense capabilities to help Ukraine defend its cities and its skies,” he said.

“The United States remains determined to lead — and to do our part to help Ukraine defend itself,” he said.

And so it is with democracies around the world. Austin said the unity demonstrated by the 50 countries that have stepped up to aid Ukraine demonstrates the resolve to defend small nations from the aggressions of the large nations, basing that defense on the international rules-based order that has served the globe so well.

Eleven months into the conflict, the combat has changed. Ukraine repelled the initial Russian push to try and take Kyiv. They launched counterattacks that saved Kharkiv and pushed the Russians out of Kherson. The fighting continues in the Donbass region, with Russian forces reliving the troglodyte combat of World War I with thousands of casualties for every inch of gain.

“We need to keep up our momentum and resolve,” the secretary said. “We need to dig even deeper. This is a decisive moment for Ukraine — and a decisive decade for the world. So make no mistake: We will support Ukraine’s self-defense for as long as it takes.”

It is a worldwide effort and Austin noted Poland’s efforts in “providing armored vehicles, in training Ukrainian forces and in providing shelter for Ukrainian refugees. “Our German hosts have announced that they will also provide a Patriot air-defense system for Ukraine, complementing our own Patriot contribution. Germany will also donate Marder Infantry Fighting Vehicles for Ukraine,” he said. “Last week, Canada announced that it would provide a NASAMS air-defense system to Ukraine. That’s a major investment in Ukraine’s ability to defend its skies.”

He noted that France is also turning over AMX-10 light tanks to Ukraine and that many European nations are involved in helping train Ukrainian forces.

“This is a crucial moment,” Austin said. “Russia is regrouping, recruiting and trying to re-equip. This is not a moment to slow down: It’s a time to dig deeper. The Ukrainian people are watching us. The Kremlin is watching us. And history is watching us.”