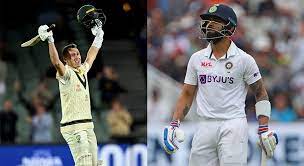 ISLAMABAD: In-form Australia star and newly-crowned No.1 Test batter in the world Marnus Labuschagne has added to his bulging resume by drawing level with India great Virat Kohli on the all-time list and bringing up a new career-high rating on the latest ICC Men’s Test Batting Rankings. Labuschagne, 28-year-old has moved further ahead at the top of the list for Test batters following an outstanding series against the West Indies.

The right-hander amassed a whopping 502 runs for the two-match series with his magnificent knock of 163 during the first innings of the second Test in Adelaide helping him to join Kohli on a career-high rating of 937 points. That sees Labuschagne now hold the equal 11th best Test rating of all time and just three Australian players – Donald Bradman (961), Steve Smith (947) and Ricky Ponting (942) – have held better ratings.

Labuschagne isn’t the only Australia player holding on to a career-high rating following the series against the West Indies, with left-hander Travis Head improving seven places on the Test batter rankings to sixth overall and a personal best 774 rating points. Head earns the rise on the back of his own century against the West Indies in Adelaide and the 28-year-old could jump even higher during the upcoming Test series against South Africa. England’s series triumph over Pakistan also saw a host of their players improve up the rankings this week, with young gun Harry Brook moving up 15 places on the Test batter rankings to 55th overall after his century in the second innings and Player of the Match performance in Multan.

Robinson improves two places to sixth overall, while Wood moves up eight spots to equal 34th following his six-wickets for the match in Multan.

There was also plenty of movement on the latest ODI rankings, with a group of India and Bangladesh players moving up the charts after the recent completion of their series.

Kohli is now the highest-ranked India batter following his two-spot rise to eighth overall, while record-breaking teammate Ishan Kishan moves from outside the top 100 to 37th courtesy of his brilliant double century in the third and final game of the series in Chattogram.

It was Bangladesh that won that three-game series 2-1 and a trio of their players made eye-catching moves on the latest ODI rankings.

Experienced left-armers Shakib Al Hasan (eighth) and Mustafizur Rahman (ninth) both improve one spot inside the top 10 on the latest ODI bowler rankings, while Mehidy Hasan Miraz jumps three places to third on the list for all-rounders following strong efforts with bat and ball during the series. (APP)