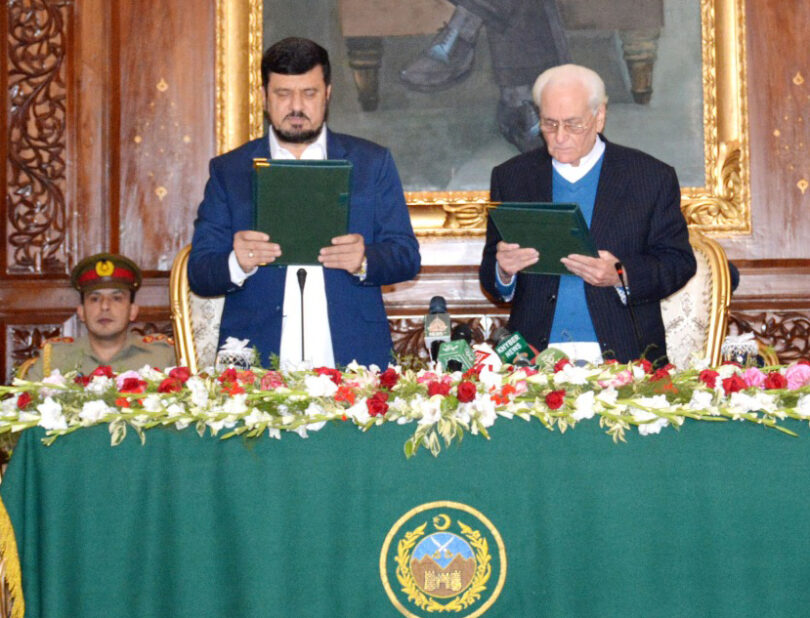 KP Governor Haji Ghulam Ali administered oath to Azam Khan, who was nominated for the post unanimously by the government and opposition a day earlier, at a ceremony held in Governor House.

Earlier in the day, the governor signed an order to appoint Khan at the coveted post on the recommendation of outgoing Chief Minister Mahmood Khan and leader of opposition Akram Durrani.

On Friday, the name of Azam Khan was unanimously agreed upon in the meeting held to finalize the appointment of the province’s caretaker CM. “Azam Khan is our consensus candidate for the post of caretaker chief minister. We have chosen a person who is acceptable to all,” said Akram Khan Durrani.

KP Chief Minister Mahmood Khan said the name of a caretaker chief minister was unanimously agreed upon for the first time in history.

Mahmood Khan announced that both sides picked Azam Khan for being a person who is acceptable to all, and further mentioned PTI nominated him after consulting with party leadership.

The recent development comes days after the provincial legislature of KP stood dissolved after the governor signed the CM’s summary for the dissolution of the KP assembly.

Former bureaucrat Muhammad Azam Khan completed his education at the University of Peshawar, and then went to Lincoln’s Inn, London to complete his Barrister-at-Law degree.

Azam Khan also served as the Chief Secretary and Secretary of different ministries in Khyber-Pakhtunkhwa.