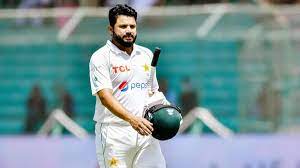 The right-handed batter was signed by Worcestershire County Club for the 2023 season after he led them well in the last edition.

Azhar scored 656 runs in 11 matches in LV — Insurance County Championship. The former international cricketer also scored 185 runs in the Royal London Cup including his innings of 130 runs against Northamptonshire.

While talking about his county cricket future after Test retirement, Azhar said he “is really looking forward” to it.

“I enjoy playing cricket, I will go and play for Worcestershire this year and try to give my best,” said Azhar who is currently busy playing club cricket in Lahore.

Last December, Azhar announced his retirement from Test cricket just three matches short of 100. The third Test between Pakistan and England in Karachi was his career’s 97th Test. Had he played three more matches, he would have become only the sixth Pakistani player to play 100 Tests.

Azhar doesn’t have immediate plans to enter the coaching arena. “At this moment, I have just retired from Test cricket and enjoying my time. I will see this option later on,” he responded to a question regarding his plans to enter coaching after retirement from all three formats.

“Like every other PSL fan, I am also very excited about the start of PSL 8. The PSL now feels special because it takes place in our country. People enjoy matches by coming to the stadium in large numbers,” he said while talking about the upcoming eighth season of Pakistan Super League (PSL).

The experienced cricketer hopes that the PSL 8 will unearth talented cricketers like in previous editions.

Azhar, who has already proved his mettle in commentary, is expected to be on the commentary panel of the PSL 8.