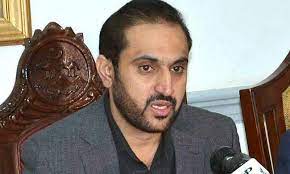 QUETTA : Balochistan Chief Minister Mir Abdul Quddus Bizenjo said on Tuesday no one would be allowed to politicise the Reko Diq project, days after the Supreme Court declared a new deal with a foreign company legal.

Bizenjo in a media talk made it clear that the provincial taxes on the copper and gold mine project would go to Balochistan. He vowed not to give in the powers granted to the province after the 18th amendment to the Constitution.

The mega foreign investment of $8 billion would not only help revive the national economy but also have a positive impact on the provincial economy. Balochistan will reap financial benefits from the accord signed with the Canadian company, he assured. Mr Bizenjo said all stakeholders, including the political parties, were taken on board prior to the Reko Diq agreement. He pledged to go to any length to satisfy the opposition about the project.

Canadian company Barrick Gold, which ended a long-standing dispute with Pakistan in March last to strike a new agreement, earlier asked the federal government to get clearance from parliament and the country’s top court to make its investment in the project save. In its short verdict, the apex court observed that the government had signed the agreement after taking the Balochistan Assembly into confidence and consulting experts.  (PPI)