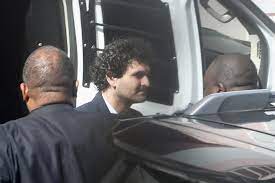 NEW YORK (AFP): US law enforcement on Wednesday took custody of Sam Bankman-Fried and were flying him from the Bahamas to New York, where prosecutors said two associates of the FTX founder had now pled guilty to charges related to the company’s collapse.

Bankman-Fried is wanted in the United States after the collapse of his FTX cryptocurrency group — headquartered in the Bahamas — and on Wednesday waived his right to challenge an extradition request, the island nation’s attorney general said.

US Attorney Damian Williams announced Wednesday night that the FBI had taken the 30-year-old into custody and that he would be “transported directly to the Southern District of New York.”

Williams also said that two key figures in the case had pled guilty to charges related to the FTX collapse, and that they were cooperating with investigators.

The charges come just weeks after the three-year-old FTX and sister trading house Alameda Research collapsed into bankruptcy, dissolving a virtual trading business that had been valued by the market at $32 billion.

Prosecutors allege Bankman-Fried cheated investors in FTX, and misused funds that belonged to customers of FTX and Alameda Research.

He “was orchestrating a massive, years-long fraud, diverting billions of dollars of the trading platform’s customer funds for his own personal benefit and to help grow his crypto empire,” US prosecutors said.

Five of the eight counts against him carry a maximum sentence of 20 years in prison each.

Separately the SEC accused him of violating securities laws.

Their charges were “in connection with their roles in the frauds that contributed to FTX’s collapse,” he said, but did not provide further details.

Williams’s office did not respond to an AFP request for comment on the charges.

Separately, the SEC and Commodity Future Trading Commission (CFTC) announced Wednesday they had filed civil suits against Ellison and Wang and that they were cooperating, which should lead to a more lenient judgment in both cases.

The CFTC estimates that $8 billion in funds were misappropriated from FTX customer accounts.

Bankman-Fried, a Bahamas permanent resident, spent the past nine days in Nassau’s Fox Hill prison, weighing his choices before telling the Nassau magistrate court Wednesday that he would not fight extradition.

According to US media, his attorneys had been attempting to negotiate with US justice authorities for his release on bail.

Even by the extreme standards of cryptocurrency trading, the past few weeks have been a wild ride for Binance, the world’s biggest exchange for crypto assets.

After the collapse of its rival FTX in a hail of allegations of fraud and criminality last month, trust in the entire sector has crumbled.

Customers pulled more than $3 billion from Binance in a single day last week as part of a three-day frenzy that saw more than $6 billion withdrawn.

On Friday, accountancy firm Mazars, engaged by Binance to provide a “proof of reserves” report, abruptly halted work with all crypto firms because of “public misunderstanding” of what they were providing.

A “proof of reserves” report is not a full audit and gives no information about liabilities.

Media reports suggested US prosecutors were still weighing up money-laundering and sanctions-busting charges against the company and possibly its co-founder and CEO Changpeng Zhao. The firm has refused to comment on the inquiry.

The stakes could not be higher.

“Any sort of demise would be a devastating blow for crypto, and would likely pull a massive chunk of the industry down with it.”

For Leigh Drogen of Starkiller Capital, it would be “armageddon” for short-term crypto asset prices if Binance collapsed.

Zhao’s public appearances have hardly helped to calm the jitters.

In one recent interview with CNBC he claimed the firm “kind of forgot” about part of a $2.1 billion payment that Binance received from FTX last year.

Zhao said a “big chunk” had been paid in FTX’s now worthless in-house token, but sat untouched for 18 months before Binance remembered and transferred the sum, then worth $580 million.

“Is forgetting about over half a billion dollars supposed to make me feel more confident in Binance’s ability to properly run an exchange,” Genevieve Roch-Decter of Grit Capital wrote in an opinion piece for Coindesk, a crypto news outlet.

Critics point out that Zhao is prone to making confusing and sometimes contradictory public statements.

He claims to want transparency but Binance refuses to divulge even basic company information such as where it is registered, let alone submit to a full audit, like a publicly-traded firm would have to undergo.

Zhao cosies up to regulators in some jurisdictions but reportedly keeps his main business well away from prying eyes in the Cayman Islands.

He stresses his firm’s solidity and competence but his personal Twitter feed paints a picture of a one-man band backed by interns.

“Who’s running the show there? Is it the same as FTX,” asked Drogen.

He said Zhao’s behaviour was “eerily similar” to Sam Bankman-Fried, the boss of FTX who is now in custody awaiting extradition to the United States on financial crimes charges.

“Everyone is very confused and scared about that,” said Drogen.

When asked to clarify details of Binance’s structure, a company spokesman said in an email “the Binance.com global business operates through a number of entities incorporated in a range of jurisdictions”.

On the issue of transparency, he said the blockchain technology that crypto relies on was “inherently transparent”.

“That said, we embrace additional transparency and we are looking into how best to provide this in the coming months,” he said.

Analysts agree that comparisons with FTX only go so far.

“While there are obvious parallels with FTX, there are important differences, the most notable of which is that Binance doesn’t have a giant in-house hedge fund,” said Charlie Erith of ByteTree Asset Management.

“I don’t think there is anybody out there, even those people who assume the absolute worst, that think Binance is even half insolvent,” said Drogen.

He pointed out that Binance is about 10 times the size of pre-collapse FTX, in terms of the assets that should be on its platform, giving it a far bigger cushion in case of a sudden upsurge in withdrawals.

But the firm’s long-term prospects are less clear — especially if US authorities push ahead with criminal charges.

“Our feeling is that nothing in crypto is too big to fail for the US government,” said Drogen, “and they’re probably going to crush something that is illicit at some level”.