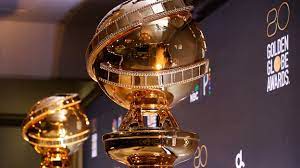 The movie about the abrupt end of a friendship on a tiny Irish island during the 1920s picked up a whopping eight nods — the most for any film in almost two decades — including nominations for star Colin Farrell and director Martin McDonagh.

The Hollywood Foreign Press Association, which organizes the Globes, has scrambled to reform itself since long-harbored criticisms of the group’s practices went public in early 2021.

Tinseltown completely distanced itself from the Globes last January over members’ lack of diversity, alleged corruption and lack of professionalism, and the show took place behind closed doors.

Broadcaster NBC has gambled that it is time to bring back the glitzy gala, albeit under a trial one-year contract, on January 10 in Beverly Hills. The entire industry is waiting to see which stars will show up.

Brendan Fraser, who was nominated Monday for his starring role in “The Whale,” a drama about a morbidly obese man, has already said he will not attend the awards.

“It’s because of the history that I have with them. And my mother didn’t raise a hypocrite,” Fraser told GQ last month.

Fraser has alleged that a former HFPA president, Philip Berk, sexually assaulted him in 2003. Berk denies the incident, and has since left the group.

Tom Cruise, who was widely seen as a strong contender in the acting categories for “Top Gun: Maverick,” was overlooked by Globes voters Monday.

Cruise last year returned his three Golden Globes to the HFPA in protest at its behavior.

Nominations for the 80th Golden Globes were unveiled on NBC’s “Today” program Monday.

In the comedy or musical category “Banshees,” “Everything Everywhere” and “Babylon” were joined by whodunnit sequel “Glass Onion: A Knives Out Mystery” and Cannes festival Palme d’Or-winner “Triangle of Sadness.”

While recognition from the HFPA has traditionally helped to kick-start Oscar campaigns and market films, the Globes’ importance this year is less certain due to the recent scandals.

The Globes drew flack for failing to nominate a single female movie director, or any best drama or best comedy films directed by women.

Danielle Deadwyler’s powerful performance as the mother of 14-year-old lynching victim Emmett Till in “Till” was among the morning’s most controversial omissions.

On the television side, comedy “Abbott Elementary” led with five nominations, while Netflix’s British royals drama “The Crown” was among several shows earning four nods.

‘Not the old HFPA’

The HFPA has recently expanded its voting body to include people with more diverse backgrounds, banned members from accepting gifts, and halted its in-person press conferences with stars, which were often derided for the improper behavior of some members.

“This is really not the old HFPA anymore,” president Helen Hoehne recently told The Hollywood Reporter.

“I respect Brendan Fraser’s decision… And I personally, sincerely hope there’s a way for us to move forward and we are able to regain Mr Fraser’s trust, along with the trust of the entire entertainment community,” she added.

Still, powerful Hollywood publicists remain divided over the Globes, with some expressing skepticism about the reforms — and a reluctance to return to the event with their stars.

A plan by US billionaire Todd Boehly to spin off the awards show into a for-profit entity and pay salaries to members has raised eyebrows.