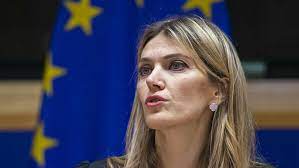 BRUSSELS (AFP): A Belgian court will decide on Thursday whether to keep a Greek MEP in jail pending trial on corruption charges in a graft scandal linked to Qatar that has rocked the European Parliament.

Eva Kaili, a 44-year-old former newsreader who was booted from her post as parliamentary vice president after police raids earlier this month, has become the face of the case.

One of Kaili’s lawyers, Michalis Dimitrakopoulos, told reporters in Brussels that she feels miserable, “very troubled” and betrayed by her boyfriend and co-accused Francesco Giorgi.

“Things are difficult, but we have very strong legal arguments to set her free,” he said, arguing that Kaili is “not a flight risk and not in a position to destroy evidence.”

She was arrested on December 9 as Belgian police, searching a number of addresses, found 1.5 million euros ($1.6 million) in cash. Kaili was charged shortly afterwards, and has been in detention since.

Another three suspects — her partner; the head of an NGO allegedly used to funnel money; and a former MEP-turned-lobbyist, all of them Italian — were also arrested.

All four are charged with “criminal organisation, corruption and money laundering”.

A Belgian judge authorised Kaili’s arrest and detention on grounds that she was allegedly caught red-handed with cash, meaning her usual parliamentary immunity could not be invoked.

The MEP denies receiving money from Qatar in exchange for influencing decisions affecting it in the EU parliament.

Qatar also denies the bribery allegations and has warned that continued linkage of it to the scandal could “negatively” impact ties and its natural gas supplies to the European Union.

Thursday’s hearing is to take place behind closed doors, with a decision expected to be given the same day, according to Belgian prosecutors and the Belgian lawyer for Kaili.

Greece has opened its own preliminary inquiry into corruption and money laundering.

Kaili’s hearing was conducted separately from the three other suspects, who appeared before court on December 14.

On that date, the court ordered Kaili’s partner Giorgi and the former MEP, Pier Antonio Panzeri, to remain in jail.

The NGO head, Niccolo Figa-Talamanca, was ordered to wear an electronic bracelet to track his movements, but that was suspended on appeal.

Kaili’s Greek lawyer Dimitrakopoulos said the day before the December 14 hearing that “she will fight to prove her innocence”.

He said that Kaili did not know of the existence of the cash — 150,000 euros, according to a Belgian law enforcement source, found in her home.

He contradicted reports saying she had admitted asking her father to remove the money uncovered at her address.

Kaili’s father had been held in custody for two days after the police searches before he was released.

Panzeri’s wife and daughter were arrested in Italy under a European warrant and could face extradition to Belgium in January to answer charges.

Apart from the money found in Kaili’s Belgian apartment, police discovered 750,000 euros in a suitcase with the father, and another 600,000 at Panzeri’s place.

He said the cash was to cover expenditure for his campaign to take over as general secretary of the International Trade Union Confederation (ITUC).

Visentini, who was detained for questioning during the Belgian police raids but later released while remaining a suspect, was suspended by the union’s board on Wednesday pending internal investigations.