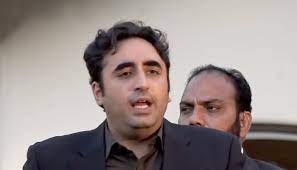 F.P. Report
KARACHI: Pakistan People’s Party (PPP) chairman and foreign minister Bilawal Bhutto Zardari on Thursday alleged that the terrorists were given NRO during the Imran Khan era.
While addressing a press conference after chairing PPP central executive committee (CEC) meeting in Karachi, Bilawal Bhutto Zardari said that his political party adopted a clear policy against terrorism and extremism. “We think that terrorists and extremists are enemies of Pakistan and Islam.” “Terrorists got NRO during Imran Khan era. The terrorists got released and later they flee from the country. We condemn Imran Khan’s policy against terrorists and extremists. The same policy should be adopted for terrorists and criminals.”
The PPP chairman backed the decision of the National Security Committee (NSC) and said that the session of the parliamentary security committee should be summoned at the earliest to take all political parties on board regarding the policies to uproot the menace of terrorism. He said that PPP always supported timely elections and opposed early elections.
“If someone is trying to delay the elections then PPP will oppose it. We think that there is a lot of time before the organisation of general elections. PPP has always supported timely polls in the country.” He further said, “It is a big achievement to remove a selected prime minister in a constitutional way.”
Bilawal said that some elements are running the politics of division and hatred. “Establishment has decided to not intervene in politics which is praiseworthy. PPP welcomes the former army chief for admitting to intervention in politics. The establishment promised to remain apolitical which is a good omen. We also want to stop non-political people from interfering in the political affairs of the country.”