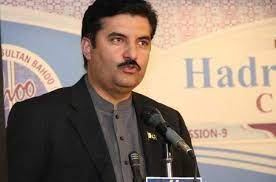 ISLAMABAD: Special Assistance to Prime Minister (with the status of Minister of State) on Poverty Alleviation and Social Safety Faisal Karim Kundi has disclosed that dynamic survey will soon be conducted to include maximum deserving families in the Benazir Income Support Programme.

He said this while responding to callers in Radio Pakistan’s Programme Hotline. Mr. Faisal Karim Kundi said the previous government had excluded 800,000 people from the list of BISP beneficiaries and now we are reviewing this decision.

He said women with a poverty score of 32 or below will become part of BISP. He urged the people to take part in the survey so that no genuinely deserving person is left behind. Mr. Faisal Karim Kundi said the coalition government has released 55 billion rupees for 8.7 million beneficiaries. Besides, two instalments were released for educational stipend to the children of BISP beneficiaries.

He said educational stipend of 1,500 rupees and 2,000 rupees is being given to male and female primary class students respectively. Replying to another caller, the SAPM said cards of beneficiaries, who visited abroad, have been blocked and now we are taking this issue into consideration to unblock their cards if their poverty score is less than 32. He said we are working to change the mode of payment via beneficiaries’ banks accounts.

He said cash assistance of 25,000 rupees was provided to each family of 2.8 million flood affected BISP beneficiaries. Mr. Faisal Karim Kundi said that in kind assistance, including ration, medicines, and food, was also provided under the banner of BISP.
He noted with concern that the number of BISP beneficiaries may witness a surge as flash floods in different parts of the country have increased poverty level. People from across Pakistan actively participated in the programme to discuss and get resolved their issues related to Benazir Income Support Programme. (INP)