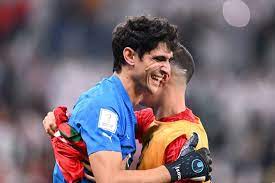 DOHA (AFP): Yassine Bounou has learned to be patient in his career, but the Morocco goalkeeper with a show-stopping nickname is proving he more than belongs on the big stage at this World Cup.

An unused squad member at the 2017 Africa Cup of Nations and the 2018 World Cup in Russia, Bounou — or “Bono” as the name on his shirt reads — has played a fundamental part in helping Morocco set a new benchmark for African football in Qatar.

With 14 foreign-born players in the squad, it has been a case of unity in diversity for Morocco — there is no better example of that solidarity than a defence which has conceded just once in five matches here.

Bounou kept 2018 runners-up Croatia at bay in their tournament opener. He suddenly disappeared just before kick-off in a 2-0 win over Belgium, having lined up with the team for the national anthems.

Replaced by Munir El Kajoui, coach Walid Regragui later cleared up the mystery by explaining Bounou had felt unwell after sustaining a knock against Croatia.

The 31-year-old Bounou hasn’t put a foot wrong since his return against Canada, the country of his birth. Despite Nayef Aguerd’s own goal, a 2-1 victory sent Morocco through as the surprising Group F winners.

Remarkably, no opposing player has scored against Morocco at this World Cup — and that remains true despite the North Africans needing penalties to see off Spain in the last 16.

After Pablo Sarabia smacked the post with Spain’s first kick, Bounou saved from Carlos Soler and Sergio Busquets as Morocco won 3-0 in the shootout to reach the quarter-finals for the very first time.

He was again man of the match in a 1-0 victory over Portugal, ending Cristiano Ronaldo’s World Cup dreams by denying the five-time Ballon d’Or winner in stoppage time.

“These kinds of moments are difficult to believe,” said Bounou, “but we’ve come to change the mentality, our insecurity. Moroccan players can compete against anyone in the world.”

“I think the most important thing, except the semi-final and that, is that we’ve changed that mentality and the generation after us will know that Moroccan players can do all this.”

Bounou’s success is a prime example of persistence paying off.

Born in Montreal, Bounou and his family returned to Morocco when he was seven. He joined the Wydad Casablanca academy and broke into the first team aged 19, appearing in the 2011 CAF Champions League final.

He signed for Atletico Madrid the following year, spending two seasons with the reserves, before moving on loan to Real Zaragoza in the second division.

With opportunities limited at Atletico, he left the club permanently for Girona in 2016 and helped them immediately win promotion to the Spanish top flight.

Herve Renard selected Munir as his first-choice ‘keeper at the 2018 World Cup, a campaign which ended in the group stage, but Bounou has since made the number one shirt his own.

After Girona’s relegation, Bounou joined Sevilla on loan for the 2019-20 season and starred as the Spanish club won a record-extending sixth Europa League title.

He soon dislodged Czech international Tomas Vaclik, signing a long-term deal with Sevilla, and earned the Zamora award last term as the ‘keeper with the lowest ratio of goals conceded per game in La Liga.

“When you have one of the best goalkeepers in the world, it gives you confidence, and Yassine gives us that,” said Regragui after his side knocked out Portugal.

“He’s not someone who thinks he’s someone else. So he helped us a lot. And when Yassine makes that kind of save (against Ronaldo) and gets into the game, we’re virtually unstoppable.”

Already the first African team to reach the World Cup semi-finals, Morocco have no intention of slowing down ahead of a monumental clash with holders France.

“When you are part of the story, you don’t grasp what’s happening very quickly. Everything’s good, we’ll stay focused. We’re happy about what we’ve done so far. But with time, we’ll realise,” said Bounou.