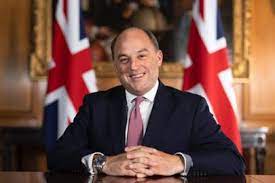 LONDON (Reuters): Britain accused Russia of planning to give Iran advanced military components in exchange for hundreds of drones, British defence minister Ben Wallace said on Tuesday, calling on the West to do more to expose the trade.

“Iran has become one of Russia’s top military backers,” Wallace told parliament as part of a statement on the Russia-Ukraine conflict.

“In return for having supplied more than 300 kamikaze drones, Russia now intends to provide Iran with advanced military components, undermining both Middle East and international security — we must expose that deal. In fact, I have, just now.”

Wallace did not provide detail on the type of military components he said Russia wanted to give Iran. The Russian defence ministry and Iran’s foreign ministry did not immediately respond to Reuters requests for comment.

Britain, along with Western allies, has provided military assistance to Ukraine following the invasion, which Russia refers to as a “special operation” to demilitarise its neighbour and rid it of nationalists.

Iran has acknowledged sending drones to Russia but said they were sent before Moscow invaded Ukraine in February. Moscow has denied its forces used Iranian drones in Ukraine.

On Monday, Russia attacked Ukraine with dozens of “kamikaze” drones, hitting critical infrastructure in and around Kyiv in what was Moscow’s third air attack on the Ukrainian capital in less than a week.

“Kamikaze” or “suicide” drones are cheaply produced, disposable unmanned aircraft that fly towards their target before plummeting at speed and detonating on impact.

Britain, the United States and the European Union have sanctioned Iranian military figures and defence manufacturers believed to be involved in the supply of Iranian drones to Russia.