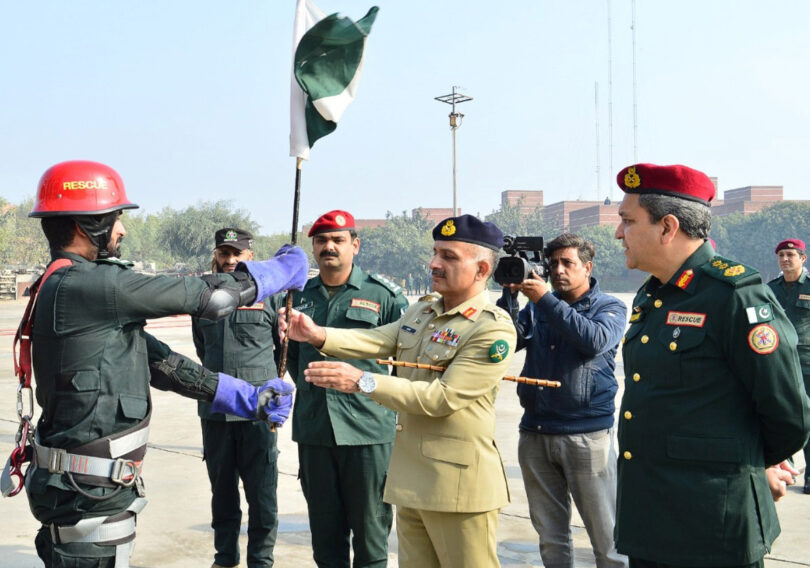 F.P. Report
ISLAMABAD: Chairman National Disaster Management Authority, Lieutenant General Inam Haider Malik, held interactive sessions with various stakeholders to seek exploratory synergy for proactive remodelled national preparedness and response mechanism during his visit to Lahore.
During the day Chairman NDMA called upon Chaudhry Parvez Elahi Chief Minister Punjab in his office. Matters related to better disaster management/mitigation and coordination mechanism between the federal and provincial stakeholders specifically Punjab came under discussion. Chairman NDMA apprised the CM about principle ideas of remodelled national response regime that will mainly incorporate technology driven early warning systems for sensing any calamity before it strikes. He also deliberated upon the need for building greater national plan for global attention.
In earlier part of the day the Chairman as Chief Guest attended passing out parade of 234 Rescuers trained for Khyber-Pakhtunkhwa (KP) and Punjab held at the HQs 1122 and distributed trophies and shields amongst the best rescuers. During his address to the newly passed out rescuers, he emphasized upon the importance of learning latest rescue techniques and praised the standards of training achieved by the trainees.
He also directed the newly passed out rescuers to transfer the acquired skills in native communities to enhance the readiness capabilities down to grass root level.
“Rescue 1122 has risen exceptionally well and is now considered as base organization for high end response during time of need, it has emerged as a team which NDMA desires to build and demonstrate to the world when Pakistan leads global bodies”, said the Chairman.
Chairman NDMA also paid a visit to Headquarters of Punjab Safe Cities Authority.
He praised and appreciated the efforts of the safe cities authority in ensuring security and safety of the people while vowing to replicate the same visual system in the remodeled NEOC at vulnerable places prone to calamities. Both departments exchanged ideas for futuristic transformation and potential exploitation in synergistic mode with other national emergencies responders.