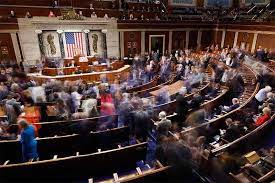 WASHONGTON (AFP): US Republicans will attempt on Wednesday to break a deadlock with far-right members of their own party over the election of a new leader of the House of Representatives, a day after the chamber was thrown into disarray by their blocking of favorite Kevin McCarthy’s bid for the position.

The California congressman needed a simple majority to be elected as Washington’s top legislator, who presides over House business and is second in line to the presidency, after the vice-president.

But for the first time in a century, the House failed to elect a speaker in a nail-biting first three rounds of voting — given blanket coverage across US television networks.

Rather than celebrating their new control of the House, the Republican party instead faces a drawn-out fight to elect a speaker that could further deepen internal divisions — and put McCarthy’s political career on the line.

The 57-year-old needed 218 votes in the lower chamber, which flipped to a narrow 222-212 Republican majority after last year’s midterm elections.

But he failed to bring into line the party rebels, including several high-profile allies of former president Donald Trump, and he was shocked by 19 “no” votes from his own side in each of the first two rounds, rising to 20 in the third.

His performance was so weak that he lost out to the Democratic minority leader Hakeem Jeffries in each of the opening three ballots — although there remains little doubt a Republican will ultimately claim the speaker’s gavel.

The House is expected to hold further ballots from midday (1700 GMT) on Wednesday until someone emerges with a majority — and it is not out of the question that a new candidate who has not been part of the process could come to the fore.

McCarthy has long coveted the role, having withdrawn from the race in 2015 amid a number of blunders and a right-wing revolt.

This time he was once again tripped up by far-right rebels, despite bowing to their calls to push aggressive investigations of Democrats including President Joe Biden after taking over the House.

Lawmakers agreed to adjourn until Wednesday amid steadily building momentum among the Republicans to regroup overnight, lick their wounds and formulate a strategy to turn catastrophic defeat into an unlikely face-saving victory.

“The reality is Rep. Kevin McCarthy doesn’t have the votes,” Florida’s Byron Donalds said in a statement ahead of the adjournment, urging fellow members of the party conference to “recess and huddle” in search of a breakthrough.

The last time it took more than one round of voting to pick a speaker at the start of a new Congress was a century ago, in 1923. One speaker selection process that began in December 1855 took 133 rounds of voting over two months.

McCarthy — who had been trying to avoid small cliques wandering off the floor to hold their own negotiations — initially planned to keep members in the room and voting until he had managed to cudgel his rivals into submission.

Some lawmakers and staffers backing McCarthy had started the day saying that he should bow out if unable to secure the gavel in the second round, US media reported.

One roadblock to McCarthy’s anointment was the perception by some on his party’s far-right that he is insufficiently loyal to Trump, who is running for the White House again after losing to Biden in 2020.

No credible Republican alternative to McCarthy had emerged by the adjournment, although one obvious name would be incoming House majority leader Steve Scalise, a McCarthyite who has nevertheless been clear that he has ambitions of his own.

The “Never Kevin” crowd are likely to see Scalise as more of the same, however.

McCarthy, who defied a subpoena from the House panel probing the 2021 assault on the Capitol, has already promised the hardliners investigations of Biden’s family and administration, as well as of the FBI and CIA.

But the more he is seen as giving in to the right, the more likely he is to alienate moderates, sparking open war between Senate and House Republicans, where there is already little love lost.

It wasn’t all doom and gloom for the Republicans in Congress.

The Senate also convened for its new term Tuesday, with Mitch McConnell, who heads the Republican minority, breaking the record for the longest-serving Senate leader.

“There is so much unnecessary turmoil in the Republican party,” Trump posted on Truth Social after the House was adjourned Tuesday evening — making a point of blaming McConnell in particular for the divisions, and without mentioning McCarthy or the House chaos.