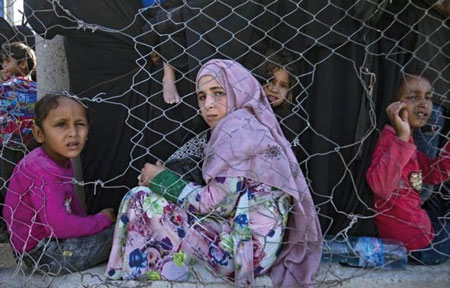 LONDON: Children repatriated from camps for former Daesh families in northeast Syria are “building new lives” in their home countries, Human Rights Watch said in a report published on Monday.

It added that the success of repatriation efforts to countries including France, Germany, the UK and Sweden should encourage Western governments to accept greater numbers of child nationals from former Daesh territories.

The 63-page report found that the majority of the children are performing well in school, taking part in a variety of hobbies, and have been given a “new chance in life” following the “horrors of the camps.”

A survey conducted for the report found that 89 percent of respondents — family members, foster parents, social workers and teachers — reported that a repatriated child was doing “very well” or “quite well” at adjusting.

On education, 73 percent said a child under their care was performing “very well” or “quite well” in school.

The report found evidence of significant emotional and behavioral trauma among some of the repatriated children, but argued that learning assistance and psychosocial support could further encourage reintegration.

About 56,000 people, mostly women and children, remain in Syria’s Al-Hol and Roj camps. Though most detainees hail from Syria and neighboring Iraq, more than 10,000 prisoners are from countries around the world, including major Western nations. HRW said almost 80 percent of children in the camps are aged under 12.

Regional Kurdish authorities that oversee the camps have warned that they lack the required resources to maintain long-term care of the detainees.

Conditions in the camps have significantly worsened in recent years, with frequent clashes between Daesh loyalists and other prisoners.

And as a result of poor living conditions, hundreds of children have died in the camps from a range of illnesses including hypothermia, malnutrition and preventable diseases.

Jo Becker, children’s rights advocacy director at HRW, said: “Children rescued from the horrors of the camps are doing well in school, making friends and building new lives in their home countries. Despite enduring unimaginable suffering, many are reintegrating remarkably well.

“The greatest risk is not bringing the children home but leaving them in the camps where they risk death, illness, recruitment by ISIS (Daesh) and indefinite detention for the suspected crimes of their parents.

“Countries with nationals in the camps should urgently allow them to return home and do their best to keep mothers and children together.”

A grandfather in Sweden whose several grandchildren were repatriated in 2019 said: “It is possible, fully possible, for reintegration and recovery of children. My grandchildren are evidence of this.

“They have recovered in the most incredible way … All children should have the opportunity to get a new chance in life.”

Since 2019, Denmark, Finland, Germany, Kazakhstan, Kyrgyzstan, Russia, Sweden, Tajikistan, the US and Uzbekistan have successfully repatriated most of their nationals from camps in Syria. However, the UK has repatriated just 10 children and Canada only four.

In October, Australia repatriated four women and 13 children in the country’s first effort to return nationals from Syria since 2019. On Oct. 31, the Netherlands repatriated 12 women and 28 children.