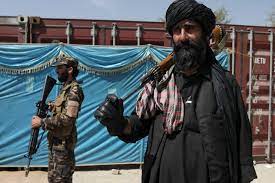 KABUL (Khaama Press): Following the terror attack in the heart of Kabul in December, which housed mostly Chines nationals, China is allegedly accused of providing modern military equipment to the Taliban according to sources.
The Islamic State Khorasan Province (ISKP) militants were behind the brutal terror attack, resulting in the injury of several Chinese citizens. China’s weaponry support to the de facto regime in Kabul has reportedly begun following the terror incident and the rising instability which threatens the country’s interests and the implementation of the “Road and Belt Initiative” (RBI) in Afghanistan.
Furthermore, Chinese sources have expressed concerns about the volatile security situation and the rising militancy in Afghanistan which could turn the country into the hub of terrorists in the region.
“In response to the growing insecurity and militancy, China has sought to provide the de facto authorities of Afghanistan to fight all forms of terrorism and extremism,” Zafar Iqbal Yousafzai, author of The Troubled Triangle: US-Pakistan Relations under the Taliban’s Shadow in The Jamestown Foundation said.
After the withdrawal of the US and international forces in August 2021, China deepened its engagement with the Taliban-run government for several reasons. China was among the few counties such as Iran, Pakistan, and Russia asking the international community to help the Taliban stabilize the country.
With no major international player on the ground, the opportunity seemed quite good for China to support the Taliban and achieve their national interests in war-torn Afghanistan.
Meanwhile, the US presence in Afghanistan was a strategic threat to China. Now with the US gone, closing ties with the Islamic Emirate of Afghanistan is a new geopolitical development for China, reported Jamestown Foundation.
China will give its utmost efforts to succeed in achieving its interests in Afghanistan through mega economic and development projects, under the umbrella of its well-known Road and Built Initiative.