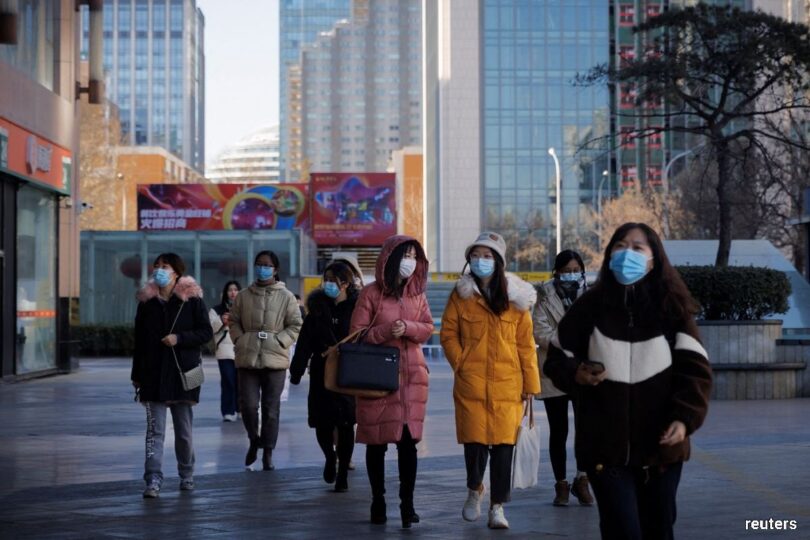 BEIJING (Reuters): China reported a record high number of COVID-19 infections on Thursday, with cities nationwide imposing localized lockdowns and other curbs that are darkening the outlook for the world’s second largest economy.

The surge in the number of infections, at record highs not seen since an outbreak in Shanghai earlier this year, is diminishing investors’ hopes that China will soon ease the rigid zero COVID-19 policy that, along with a downturn in the property market, is battering the economy.

The restrictions have also extracted a toll on China’s increasingly frustrated residents, as well as output at factories including the world’s biggest iPhone plant, which has been rocked by violent clashes between workers and security personnel in a rare show of dissent.

“We believe reopening is still likely to be a prolonged process with high costs,” Nomura analysts wrote in a note. The brokerage cut its GDP forecast for the fourth quarter to 2.4 percent year-over-year from 2.8 percent, and also cut its forecast for full-year growth to 2.8 percent from 2.9 percent.

China’s leadership has stuck by its zero COVID-19 policy, which includes some of the strictest restrictions in the world, saying it is necessary to save lives and prevent the medical system from being overwhelmed.

However, in an acknowledgement of the pressure on the economy, the cabinet said China would use timely cuts in bank cash reserves and use other monetary policy tools to make sure there is enough liquidity, state media reported on Wednesday, a hint that a cut in the reserve requirement ratio (RRR) may be coming soon.

China recorded 31,444 new local COVID-19 cases for Wednesday, breaking the record set on April 13, when Shanghai was in a city-wide lockdown that would last two months.

While official infection tallies are low by global standards, China tries to stamp out every infection chain, making it a global outlier under a signature policy of President Xi Jinping.

China recently began loosening some measures related to mass-testing and quarantine, and is trying to avoid catch-all measures such as lockdowns like the one imposed on Shanghai’s 25 million residents.

Recently, cities have been using more localized and often unannounced lockdowns. In Beijing, for example, numerous residents said they had received notices from their housing compounds in recent days informing them of three-day lockdowns.

Nomura analysts estimate that more than one-fifth of China’s total GDP is under lockdown, a figure that exceeds the size of the British economy.

“Shanghai-style full lockdowns could be avoided, but they might be replaced by more frequent partial lockdowns in a rising number of cities due to surging COVID case numbers,” Nomura analysts wrote. The bank has also lowered its GDP growth forecast for next year to 4.0 percent from 4.3 percent.

The city of Zhengzhou, where workers at the massive Foxconn factory that makes iPhones for Apple Inc. staged protests, announced five days of mass testing in eight of its districts, the latest city to revive daily tests for millions of residents.