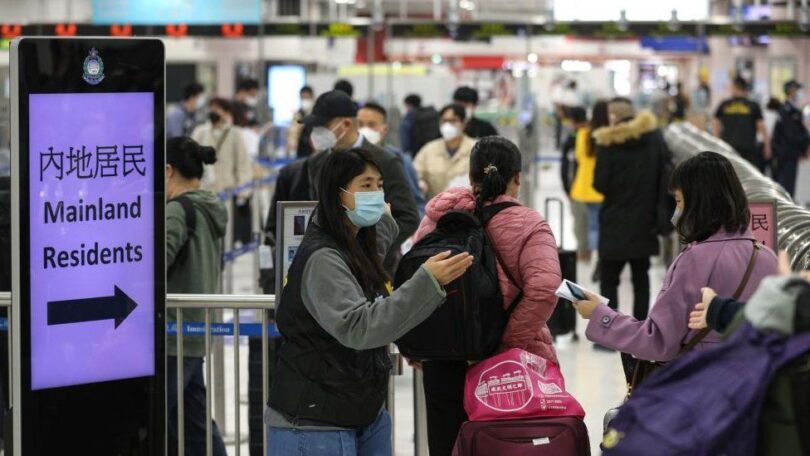 BEIJING (BBC): China has reopened its borders to international visitors for the first time since it imposed travel restrictions in March 2020.
Incoming travellers will no longer need to quarantine – marking a significant change in the country’s Covid policy as it battles a surge in cases.
They will still require proof of a negative PCR test taken within 48 hours of travelling.
The move has been welcomed by many eager to reunite with family.
In Hong Kong, 400,000 people are expected to travel into mainland China in the coming weeks with long queues for flights into cities including Beijing and Xiamen.
On Sunday, double-decker coaches packed with travellers arrived at the Hong Kong-Zhuhai-Macau Bridge to catch buses to the Guangdong province – among them were college students returning home.
One man told the BBC he hadn’t seen his extended family in five years and could not hold back his excitement, having just bought a ticket back to China. A woman told news agency Reuters she had not seen her parents in years – despite one of them suffering from colon cancer – and said she was “so, so happy”.
The country’s reopening comes at the start of “chun yun”, the first period of Lunar New Year travel. Before the pandemic, it was the largest annual worldwide migration of people returning home to spend time with family. Two billion trips are expected to be made this Lunar New Year, double the number that travelled last year. Li Hua, who travelled from the UK to China – where her family lives – for the festival said it had been “too long” since she had returned, “I’m so happy to be back, and breathe Chinese air. So happy, so happy”.
Mark Clayton returned home to Zhuhai, in Guandong, with his wife and baby after visiting Hong Kong. He told the BBC his trip home had been “nearly as smooth as it used to be pre-Covid”. “We didn’t even show them the PCR, we simply scanned a code and put in a very quick customs declaration… And then straight through,” he said. But there is concern from some that opening the borders will result in more transmission of Covid-19.
Some local bus drivers at the Hong Kong-Zhuhai-Macau Bridge told the BBC they are worried they might get the virus from incoming travellers, and want their companies to provide them with more protection.
Over the past three years China had one of the world’s strictest Covid health policies that saw numerous lockdowns, frequent testing requirements and had a significant impact on the nation’s economy.
The government recently walked back that policy after mass protests across the country, triggered by a fire in a high-rise block in the Xinjiang region that killed 10 people. Many Chinese believed the long-running Covid restrictions contributed to the deaths, but authorities denied this.
Since China abandoned the key elements of its Covid zero policy there have been reports of hospitals and crematoriums being overwhelmed, but the country has stopped publishing its case numbers and reported only two deaths on Saturday. On the same day, the Chinese government banned over 1,000 social media accounts critical of its handling of the virus. The anticipated surge in cases and travel out of China has prompted many countries – including the UK – to impose requirements for a negative COVID-19 test on people arriving from China, drawing the ire of the Chinese government.