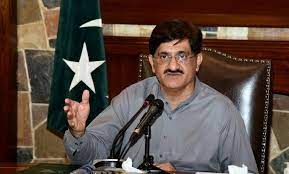 KARACHI: Sindh Chief Minister Syed Murad Ali Shah, on Thursday, said that the rehabilitation of flood affected population and infrastructure and framing the effective policy to mitigate negative impacts caused by Covid-19 as well as exploiting opportunities in the post-COVID world were the major challenges. He expressed the views while addressing the participants of 52nd PN Staff Course and 20th Correspondence Staff Course here at CM House.

Murad Ali Shah said that Pakistan was a country of over 200 million people, and by 2025 we would have 100 million people in the middle class, making Pakistan, the world’s 10th largest middle-class country.

The CM said that Pakistan promised to become one of the fastest-growing economies, and he showed his confidence that with the development of infrastructure, investment in energy, education, vocational training and rapidly improving healthcare, we were poised to take off and compete alongside the rest of the world.

The CM talking about devastating floods said that Sindh was passing through one of the most challenging times of its history, and it was quite explicit from the unprecedented and heavy torrential rains that occurred in July and August which claimed 801, lives, including 151 female, and 339 children and around 8,442 were injured. He said that as per the Livestock department around 436,000 livestock have perished, 2,087,186 houses damaged, and crops standing over 3,777,272 acres washed away. He added that the survey of the works and service dept indicated that around 860 roads (8,463 km), 165 bridges, 1749 culverts, and 2115 causeways were badly damaged during the 2022 Floods.

Murad Shah said that his government, to address the crisis, took Relief and Rescue Operations in which 22 Tent Cities were established in Malir, Jamshoro, Dadu, Matiari, Thatta, Khairpuar, Kambar-Shahdadkot, and distributed relief items, including 873,000 Tents, 3,775,560 Mosquito Nets, 2,425,318 Rations Bags, and 1,411,416 Blankets. The CM said that he was also working with the World Bank (W.B) and has established a public sector company for the rehabilitation and reconstruction of damaged houses in calamity-hit areas.
Highlighting the business opportunities in Karachi the CM said that success of industry and business was fundamentally dependent on two key criteria: connectivity and access to the commercial centre. “This makes Sindh, including Karachi and its surrounding areas, an ideal business destination,” he added.

Special Economic Zones such as Dhabeji, a Priority Project under China-Pakistan Economic Corridor (CPEC), would facilitate potential investors to establish new enterprises or transfer their facilities to Dhabeji SEZ. He also mentioned two economic zones approved by the Federal government namely Nausheroferoze Industrial Park, and Bhulari Special Economic Zone, besides, Khairpur SEZ has already been completed and industrial units were being set up on priority.

Shah said that his government was working hard on the development of Education City in Karachi and has established a Sindh Enterprise Development Fund. He added that the Fund has the domain of providing facilities in terms of Technical Assistance, Assistance in preparing feasibility, obtaining loans from banks, preparing applications as well as financial assistance, including the Payment of Interest (KIBOR) Rate Subsidy 100 percent on capital cost. The CM said that effective policy to mitigate the negative impact caused by Covid-19 and exploiting opportunities in the post-COVID world was a big challenge. He added that further easing the regulatory framework and investment climate with the support of the federal government might play an important role in the regard. (APP)