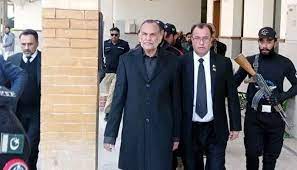 During the hearing, the deputy attorney general requested more time for the arguments. The court then inquired about the position of the challan. The Federal Investigation Agency (FIA) told the court that the challan was submitted on Dec 24, 2022, and the hearing will take place on Jan 3.

The deputy attorney general said the PTI senator had committed the crime again and a case had already been pending.

The FIA said Mr Swati did not surrender his Twitter account. The court said the investigating agency itself ended the physical remand. “Is there a chance of tampering?” the court questioned the FIA officials and they responded by saying that Mr Swati did not deny the tweet.

Meanwhile, Azam Swati’s lawyer Babar Awan appeared in court on behalf of his client and told the court that that Mr Swati’s son wanted to put his viewpoint before the court. “My father had written a letter, I want to read it with court’s permission,” said Mr Swati’s son. At this, Justice Farooq said the letter was before the court and a larger bench would be constituted to settle this matter once and for all.

The leader’s lawyer said the court should look into this matter today, to which the court said a larger bench could not be formed.