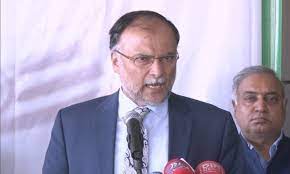 ISLAMABAD (APP): Minister for Planning Development & Special Initiatives, Professor Ahsan Iqbal on Thursday dispelled the rumors related to default risks of the country and called for adopting export oriented policies for public and private sector to accelerate export led growth.
The Minister made these remarks while chairing a roundtable on ‘Conducive Business Environment’ organized by the Ministry of Planning Commission on Thursday. The roundtable was attended by the representatives of relevant ministries, chambers of commerce and other relevant stakeholders.
“A specific political party is propagating the rumors about the country’s default for the political objectives; however, Pakistan has come out of economic crises successfully after taking tough decisions,” said the Minister. The Minister said that anyone who talks about the default of the country is Pakistan’s enemy and the politics of those who declare Pakistan as default will default soon. To promote the private sector investments, we need to create an enabling and investor friendly environment in the country while emphasizing to increase exports to up to 100 billion dollars.
The problems faced by the country will be solved under the leadership of the Prime Minister Shahbaz Sharif who has adopted the path of stability while moving the country in the right direction, he added.
Furthermore, he said that China offers Pakistan a ‘potential export market’ which we must take advantage of while emphasizing the importance of local and foreign investors in the country which he believes should be top priority. “There are immense opportunities for exports in the Chinese market but unfortunately, Pakistan has only 3 billion dollars’ contribution in China’s 2250 billion dollar exports which must be increased, ” remarked the Minister.
The Minister asked country’s chambers of commerce to take special measures in increasing exports to China while reiterating that the Planning Ministry is committed to facilitate through one-window operation.