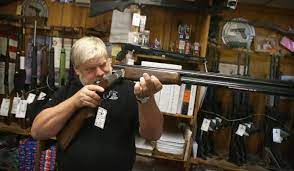 NEW YORK (Reuters): A federal appeals court on Monday allowed New York to restrict the carrying of firearms on private property under a new law adopted in wake of a major US Supreme Court ruling that expanded gun rights.

The 2nd US Circuit Court of Appeals put on hold a judge’s order from last month that barred officials from enforcing part of the new law making it a felony to carry a gun on private property without the property owner’s express consent.

It marked the latest instance of the New York-based federal appeals court staying a ruling that had blocked large parts of the Concealed Carry Improvement Act, passed this year by the Democratic-led state legislature.

The law was enacted after the Supreme Court in June struck down the state’s strict gun permitting regime and declared for the first time that the US Constitution protects a person’s right to carry a handgun in public for self-defense.

The new law made obtaining a firearms license more difficult as of Sept. 1 and barred firearms from a long list of “sensitive” public and private places.

Two firearms owners and two gun rights groups including Firearms Policy Coalition sued to challenge a provision that made it a felony for a licensed gun owner to possess a firearm on any private property unless the property owner allowed it with a sign or by giving express consent.

US District Judge John Sinatra, an appointee of former Republican President Donald Trump in Buffalo, in a Nov. 22 decision concluded that provision violated the US Constitution’s Second Amendment right to “keep and bear arms.”

Sinatra said the provision was unconstitutional under the Supreme Court’s gun rights precedents and would “interfere with the Second Amendment rights of law-abiding citizens who seek to carry for self-defense outside of their own homes.”