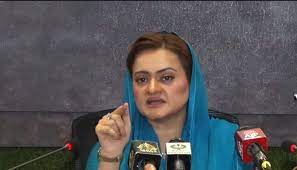 and Khyber Pakhtunkhwa which gave protection to him, his wife Bushra Bibi and her friend Farah Gogi against their corruption, loot and plunder.

“The coalition government is not afraid of Imran Khan who is a coward, liar and hypocrite person and does not have courage to dissolve the assemblies which he believes will help him save his skin in foreign funding, Toshakhana and other cases,” she said while addressing a news conference here.

She dared Imran Khan to dissolve the assemblies of both the provinces instead of just giving dates just like the 2014 sit-in when he only kept himself limited to giving dates of toppling the then Pakistan Muslim League-Nawaz (PML-N) government.

“We have all the options before us and have every right to exercise them as the country does not and cannot afford political instability at this time,” Marriyum said, reiterating that the coalition government would complete its constitutional term and the general elections would be held in October 2023.

She said it was out of question that Imran Khan would dissolve the assemblies which helped him run his kitchen and arrange the public gatherings with pomp.

Imran Khan just had one point agenda which was to get an NRO like concession from the coalition government, she said, adding these tactics would not help him pressurize those who had faced his brutalities during his “fascist” and “autocratic” regime.

“He believes that he can blackmail or put pressure on us with such threats, but he should know that we did not bow to his pressure at that time when he put us in the death cells,” Marriyum remarked.

At the outset of her presser, the minister said Imran Khan again wasted time of media and nation today by repeating his old speech which proved that his mental condition was not good. The faces of the chief ministers of Punjab and KP, who sat beside him, clearly showed that they lacked interest in what he was saying during his address to the PTI workers.

She said Imran Khan seemed confused and frustrated which showed that the loss of power had badly impacted his mental health. “The National Assembly has been vacated from the propaganda group through the vote of no confidence motion and days are not far when Imran Khan’s governments in  provincial assemblies of Punjab and Khyber Pakhtunkhwa will also fall,” she added.

When his power ended, she said he ordered the PTI government’s finance minister in Khyber Pakhtunkhwa to write a letter to International Monetary Fund to sabotage the deal which was signed by his own government before its ouster.

Marriyum said Imran Khan started making noise on realizing that he, his wife and her friend Farah Gogi would have to answer about their corruptions after the removal of their government which was marred by incompetency, corruption and bad governance.

She feared that Imran Khan could attack the masses, democracy, political and economic stability  as he did on the Constitution when he realized that the no-confidence motion was going to succeed against him.

This entire noise and distraction of Imran Khan was only aimed at saving him from the accountability, she said, adding the nation asked from him today that what had happened if he was ousted from the power in a democratic way.

She said Imran Khan’s clamoring was only meant to suppress the voices which was being raised for his accountability in the foreign funding and Toshakhana case, and against his loot and plunder of four year rule, and for harming the national interests and foreign policy.

Marriyum said Imran Khan was a “shameless” person who claimed that his predecessor inherited him a fragile economy which contradicted the official statistics which spoke volume about the performance of the PML-N’s previous government.

However, when Imran Khan was ousted from the power, the country had low economic growth, extreme inflation, loadshedding, unemployment and foreign debt at the highest level, she added.

She said Imran Khan destroyed economy and industry, and now bent on bringing political instability in the country under a plan which he devised to comply the funding received by his party from abroad to damage the country.

The minister said Imran Khan should have inform the nation about the interference of institutions in the government affairs when he was in power. He should have dissolved the National Assembly at that time, but ironically, he lacked such courage.

On the contrary, she said Nawaz Sharif himself write a letter to the Supreme Court for the investigation of alleged corruption as he (Nawaz Sharif) believed that all the allegations against him were fake and false.

“The Sharif family had given answer of 40 years, no family in the political history has done so “she added.

Maryam Nawaz did not get any relief from the courts under the NAB amendment, she said, adding the PML-N vice president was acquitted on merit.

She said Imran Khan failed to prove a single allegation against his opponents despite abducting Tayyba Gul in the Prime Minister’s House, blackmailing the then NAB chairman and locking up the then DG FIA in the bathroom of PM’s Office.

He used all the state resources to victimize his political opponents, but the entire leadership of PML-N vindicated in those fake cases, she added.

She said that all the political leaders of the Pakistan Muslim League fought their cases in a court of law. No leader of PMLN make make hue and cry like Imran Khan, and talk about the division of the country into pieces.

She alleged that Imran Khan and his fellow had no answer for their corruption.

” Imran Khan is responsible for all the problems being faced by the country and the nation,” she said, adding the coalition government under the leadership of prime minister Shehbaz Sharif had made a promise to the people of the country to solve their problems and make the country’s economy stronger.

“We are committed to taking the foreign and economic policy of the country in the right direction and providing relief to masses and creating job opportunities for youngsters,” she added.

The minister said the people of the country would not listen to the false narrative of Imran Khan anymore.

She alleged that no mega-development projects were initiated by Imran Khan during his three and half years tenure in his government.

To a question she said, people were in trouble due to the policies and corruption of the Imran-led government. “Our entire focus is to control price hike, restore CPEC projects, create job opportunities and take the country’s economy in the right direction,” she added.

The minister said that all the coalition partners are unanimous that, Imran Khan is a liar, Fitna, thief and foreign agent.