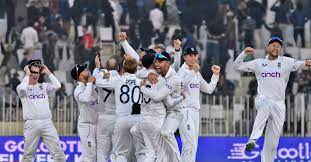 NEW DELHI (Reuters): England won the T20 World Cup in Australia to firmly establish themselves as the best white-ball team of the era and set out to revolutionise test cricket with an equally bold approach to the longest format of the game.

After years of under-achieving as a 50-overs side, Eoin Morgan led England to their maiden ODI World Cup triumph in 2019 and three years later Jos Buttler guided them to their second T20 World Cup title and made them the first team to possess both limited-overs crowns.

It was their premature exit from the 2015 World Cup in Australia that had forced England into overhauling their approach to limited-overs cricket.

And it took a 4-0 Ashes drubbing in Australia, and an equally dispiriting tour of West Indies, to force what the British media termed a “red-ball reset”.

Accordingly, the reins of the test team were given to two men with identical cricket philosophies.

At home, England won six of their first seven tests playing a highly entertaining brand of results-oriented cricket that made fans sit up and take notice.

Even those who doubted if the radical approach would succeed abroad have turned staunch “Bazball” believers after England registered their first series win in Pakistan since 2000-01.

“We’re trying to make test cricket as exciting as the short formats,” Stokes said after England conjured up one of their greatest away victories in Rawalpindi.

“Who doesn’t want to watch a test go into day five and be played like that?”

Stokes insists England are not interested in draws and do not mind losing in their single-minded pursuit of victory.

The 31-year old, who had already secured his legacy with match-winning performances in two World Cup finals, has led by example particularly in Rawalpindi.

Stokes gave his batters a licence to thrill, led their lion-hearted bowling on a lifeless track, made a bold declaration and set attacking fields to force a result.

“That was one of the greatest exhibitions of test captaincy I have ever seen,” gushed former England captain Nasser Hussain.

While it signals an interesting time for test cricket, T20 continued to flourish with South Africa and the United Arab Emirates announcing new leagues beginning next month.

The governing body, which wants the game in multi-sport events, particularly took heart from the successful debut of women’s T20 in the Birmingham Commonwealth Games where Meg Lanning led Australia to the gold medal.

It was a predictable triumph for arguably the greatest women’s side ever who won the 2022 ODI World Cup after going unbeaten through the tournament.

Australian cricket fans had their share of grief too.

Tributes poured in and high-profile athletes, politicians and celebrities attended the memorial to confirm Warne’s status as one of the greats of the game.

Despite losing in the finals of the Asia Cup and the T20 World Cup, Pakistan had a positive year.

They convinced England and Australia to overcome security concerns and tour the country again which should encourage other teams to play in Pakistan.