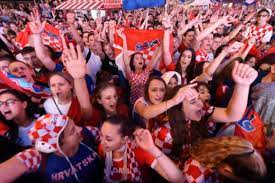 DOHA (AFP): Croatians were sad Tuesday after Argentina snuffed out their World Cup hopes in a comprehensive 3-0 semi-final defeat but their overriding emotion was pride that the tiny nation had reached the final four.

Braving sub-zero temperatures, several thousand people gathered at a fan zone in Zagreb’s main square to cheer for the “Fiery Ones” (Vatreni in Croatian) on a giant screen.

Many were dressed in the team’s chequered red-and-white jerseys under their winter coats.

Ahead of the match expectations were high as the optimism of fans was boosted by the 4-2 victory against Brazil on penalties on Friday.

Many Croatians were hoping that the squad lead by star midfielder Luka Modric could repeat the success of 2018 and reach the World Cup final — and even go one better.

“If we could beat Brazil, we can beat Argentina too,” Viktor Gligo, a McDonald’s employee, told AFP before the match.

But at the half-time break, when Argentina was leading 2-0, disillusionment had set in.

Ruzica Doroc, 62, said she was “disappointed because Croatia didn’t show the same level of game as they did against Brazil”.

Then she cheered up at the thought of the third-place playoff to come when Croatia will face the losing team from the second semi-final between France and Morocco.

“But to go for the third place is already something … we are fantastic.”

High-school student Mia Sragalj, 16, shared the view, telling AFP that if Croatia lost she would be “disappointed but also proud since we went far”.

Despite the defeat, supporters briefly celebrated in the square where they sang fans songs and lit flares.

Some fans were annoyed at the penalty awarded when goalkeeper Dominik Livakovic collided with Julian Alvarez.

“The penalty should not have been given, our goalkeeper was in the right place,” 18-year-old fan Jan Mesic told AFP.

“But, well played Argentina, they were the better team tonight,” he added.