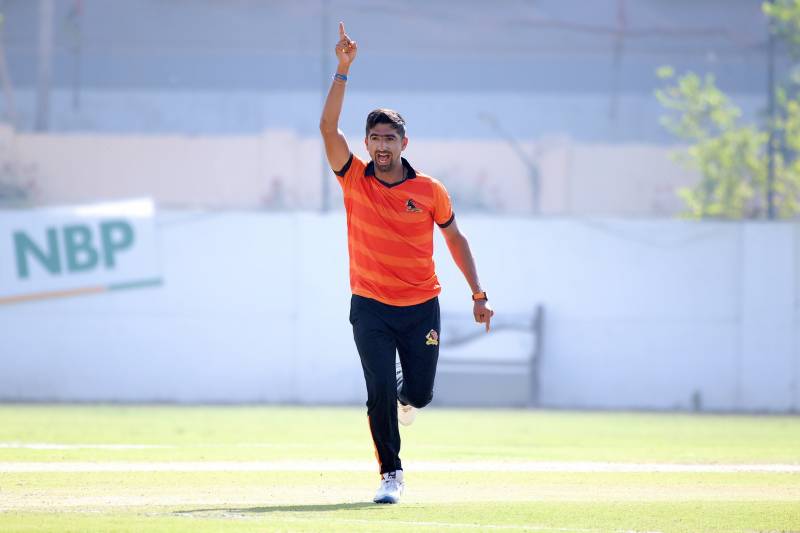 KARACHI: Pakistan international fast bowler Shahnawaz Dahani and Test fast bowler Mir Hamza shared 10 wickets between them to dismiss Khyber Pakhtunkhwa for a paltry 40 runs – the lowest in Pakistan Cup history, helping Sindh to a four-wicket win in the fourth round match of the Pakistan Cup at the NBP Sports Complex on Friday.

In other fourth round matches, defending champions Balochistan defeated Central Punjab by 28 runs, while Northern overcame Southern Punjab by 10 runs.

After being put into bat by Sindh’s captain Omair Bin Yousaf, Khyber Pakhtunkhwa batters never got the chance to occupy the crease as the pair of Hamza and Dahani went berserk with the new ball at both ends. Khyber Pakhtunkhwa were bundled out for 40 in 20 overs and only one batter managed to enter double figures.

Dahani, who completed his quota of 10 overs, went for only 19 runs and took six wickets, registering four maidens. Hamza, with his left-arm pace, bowled eight overs and gave away only 12 runs, taking four wickets. He too bowled four maiden overs during his fiery spell.
Chasing a modest 41-run target, Sindh lost six wickets, before achieving the target in the 14th over. Khyber Pakhtunkhwa’s captain and spinner Sajid Khan took three wickets for 14 runs, while Khalid Usman bagged two wickets for four runs from five overs.

Batting first, Northern’s Umar Akmal was amongst the runs again as the middle-order batter scored a 46-ball 49 – the highest score for his side, which included five fours and two sixes. He was equally supported by wicketkeeper-batter Rohail Nazir – who coming into bat at number six – scored 40 off 58 balls, hitting two sixes and one four. The pair added 50 runs for the sixth wicket after half of Northern’s side were sent back to the pavilion with 123 runs on the board.

Northern were eventually bowled out for 215 in the 50th over. Hassan Khan grabbed four wickets for 31, while Hasan Ali took two for 48 in 9.3 overs. Mohammad Ilyas with his right-arm fast took three wickets and gave away 27 runs from seven overs.

In reply, Southern Punjab had a poor start and were reeling at 43 for five, when Muhammad Imran, coming into bat at number seven joined opening batter Usman. The pair added 64 runs for the sixth wicket, before Imran was run out, scoring 33 off 62 balls, hitting one four and a six.

The top wicket-taker in the first innings Hassan soon followed Imran back to the hut but not before hitting two boundaries during his 22-ball 19. Captain Hasan joined Usman and the two stitched an important 41-run partnership for the eighth wicket, but Hasan while playing too many shots was out caught by Mohammad Huraira off Aamir Jamal for a quick-fire 33 off 19 balls, stroking four towering sixes. Usman stayed at one end, while Southern Punjab lost the remaining two wickets adding 21 runs to the total.

Usman’s unbeaten knock included four fours and one six which came off 126 balls. For the winning team, Athar Mehmood took four scalps for 46, while Aamir took two for 53 from his 1o overs.

The decision to put Balochistan into bat by Central Punjab’s captain Aamer Yamin backfired, as Balochistan scored 331 for five in their allotted 50 overs. The left-handed young wicketkeeper-batter Haseebullah scored a 138-ball 123, smashing 13 fours and two sixes. He was ably supported by another southpaw Hussain, who returned undefeated on 141 off 122 balls, studded with 12 fours and five sixes. The pair knitted a 211-run partnership for the third wicket.

In return, Central Punjab were all out for 303 in 47 overs. Opening batter Mohammad Faizan top-scored for his side, scoring a 72-ball 94, striking 10 fours and four sixes. In Faizan’s support came Junaid Ali, who coming into bat at number three struck nine fours and two sixes and played a 58-ball 75. Junaid was involved in a 166-run partnership with Faizan.

Down the order, Usama Mir, batting at number nine scored 42 off 26 balls, but after his departure Central Punjab were bowled out with three overs to spare. Balochistan’s Khurram Shahzad and Mohammad Junaid took three wickets apiece, while Amad Butt took two for 75 from nine overs.