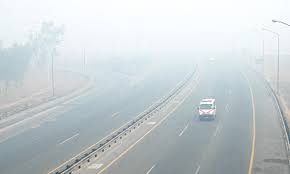 LAHORE: Dense fog has engulfed several plain areas of Punjab due to which Motorway M-2 from Lahore to Kot Momin, Lahore-Multan Motorway, Lahore-Sialkot Motorway and Motorway M-5 have been closed for all sorts of traffic, on Saturday.

The weather will remain cold and dry in several parts of the country. Whereas, Punjab and Sindh will be engulfed in dense fog during early morning and late night.

Fog will also engulf several parts of the Pothohar region during the morning time.