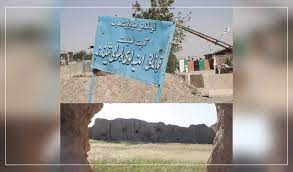 HERAT (Pajhwok): The residents of Shindand district in western Harat province after experiencing two decades of insecurity and tribal disputes are now heading towards a peaceful life and reconciliation, tribal elders say. Shindand is a vast district situated 100 kilometers south of Herat city, the provincial capital.
Also called Sabzwar, Shindand had never been without wars and disputes even for a day during the past two decades. It residents lived a terrible life due to the wars and insecurity and tribal disputes contributed to their sufferings. Local residents say after the current government’s coming to power and efforts of local officials, tribal disputes have been completely resolved.
Ghulam Hazrat, a resident of Chahar Mahal area of the district, told Pajhwok Afghan News there had been usually differences among residents on ethnic lines which sometimes led to violent clashes. Such disputes had divided the residents into different sects and their differences sometimes led to bloody conflicts, but now such problems and disputes have been resolved to a great extent, he added.
Saadullah, a resident of Azizabad village of Shindand district, told Pajhwok the residents of the district had never enjoyed peace and security during the past two decades. The wars that happened in Shindand district had no example all over Afghanistan, Saadullah said.
Abdul Rahman, another resident of Shindand district, said he fought for four years with his neighbors over a land dispute. However, his dispute with his neighbors was finally resolved through mediation of tribal elders, he said. Abdul Rahman believed the role of local officials and tribal elders was critical in resolving tribal disputes. “Pardoning ends up in friendship while revenge adds fuel to the fire”.
Shindand district chief Mawlawi SharfuddinMukhlis, told Pajhwok Afghan News they held monthly meetings with tribal elders to resolve such disputes. He said such disputes among the people had decreased to almost zero. MawlawiGhulamHaidar, the district police chief, said he had so far succeeded to solve ten disputes.
Shindand once considered the center of all fights and wars in the western zone of the country was now the most peaceful district, Haidar added. MawlanaNaeemul Haq, the Information and Culture department head, also said after the takeover by Islamic Emirate, the graph of local disputes in Shindand had dropped to zero. He added their regime treated all people equally and without distinction.
He said the government was trying to resolve disputes among people in cooperation with tribal elders. Tribal disputes are common in Afghanistan, but the incumbent government is trying to resolve them one after another with the help of tribal elders.