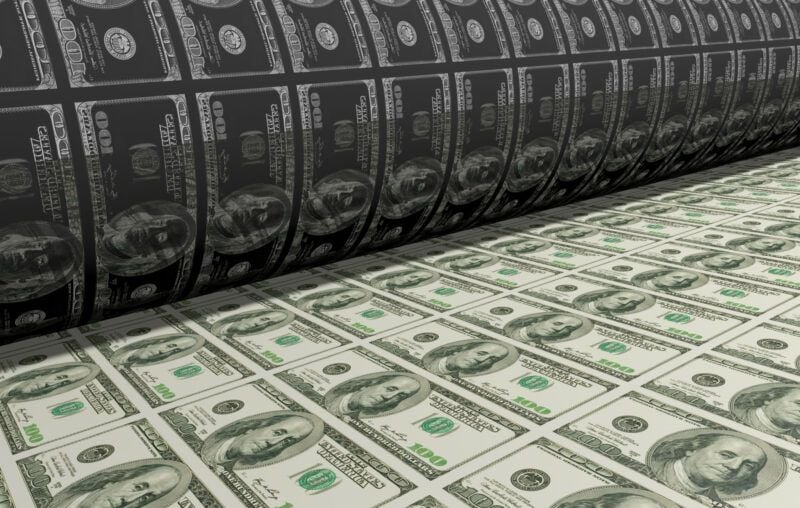 Polling data suggests that many Americans see government spending as one of the primary drivers of inflation. Economic theory, however, tells us that the relationship between the two phenomena is less strong than the American public seems to believe. To understand why government spending is not the source of inflation, we need a rigorous-yet-manageable way of thinking about the effect that changes in government spending have on the determinants of inflation. Fortunately, economists have developed a relatively straightforward model that we can use to answer this question.

The first part of this model is the supply and demand for money, which determine the inflation rate. For example, if the money supply increases by 4 percent per year while money demand rises by 2 percent per year, then inflation will be 2 percent. In short, inflation occurs whenever the supply of money grows faster than the demand to hold it. It follows, then, that the question as to whether government spending causes inflation is a question of whether changes in government spending affect the supply of or demand for money.

Ultimately, central banks control the growth rate of the money supply through their control of what economists call “high-powered money.” Historically, of course, the primary purpose of central banks was to provide the governments that sponsor them with revenue, especially during wartime. Even in the modern era, central bankers often face political pressure to backstop increases in government spending with monetary stimulus. Nonetheless, central bankers could, in principle, refuse to help finance additional spending, so there is no necessary connection between government spending and the money supply.

What about the link between government spending and the demand for money? Here, things are slightly more complicated. To understand this relationship, we need to introduce two additional pieces of our model (the factors that influence the demand for money and the loanable-funds market) and make some simplifying assumptions. I assume that the growth rate of the money supply remains constant, i.e., the central bank refuses to help finance the additional spending. I also assume that the government pays for the spending increase by issuing debt, which it uses to finance the production of goods and services the private sector is not already producing.

While deficit spending does not necessarily affect the money supply, it does affect the yields on short- and long-term bonds and, by implication, the demand for money. To see why deficit spending has this effect, we need to understand how the loanable-funds market works. The supply of loanable funds represents the savings available for consumption and investment by the public and private sectors. When government spending increases and the budget deficit widens, fewer funds are available for the private sector to use. As a result, the interest rate increases to choke off private demand for loanable funds.

Of course, there isn’t a single loanable-funds market. There are many. One of the most important of these markets is the bond market. When governments borrow, they do so by issuing bonds. As the supply of bonds increases, so too does their yields. If we assume that the increased supply of government bonds does not affect the return to holding money, the higher yields on these bonds will reduce desired fluidity. As a result, the growth rate of money demand falls relative to that of the money supply, which I have assumed is unaffected by the increase in government spending.

With the money supply growing faster than the demand for money, people will try to spend their excess cash balances. In the aggregate, however, everyone cannot spend their cash balances because a dollar spent by one person is a dollar received by someone else. Thus, as people try to reduce their cash balances, they will bid up the prices of financial assets, goods, and services.

It appears that increases in government spending can fuel inflation by reducing the growth rate of money demand. But appearances can be deceiving.

Today, nearly 90 percent of the money supply in the United States consists of bank deposits. The return to holding money in this form includes the interest payments banks pay on deposits, either explicitly through direct interest payments or implicitly through various perks such as “free” checking. As interest rates rise in response to increased government spending, banks will find they need to offer their customers higher interest rates, increasing the yield on money. Banks will continue to pay higher rates until the initial decrease in fluidity fully reverses. As a result, the demand for money will rise to where it was before the government increased spending, thereby offsetting any inflation that occurred initially. So, government spending doesn’t affect the demand for money either, at least not in the long run.