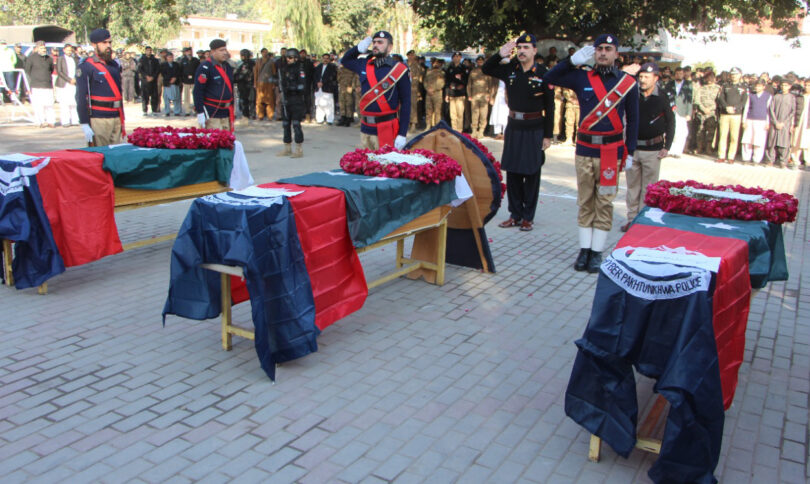 According to police, the terrorists attacked Sarband Police station from three sides by hurling hand grenades and opening indiscriminate firing. The attack was repulsed by the Police force who responded with commendable audacity to attackers by exchange of firing and counterattacks.

On receiving a report of the attack, DSP Badahare, Sardar Hussain forthwith reached on the spot along with two police constables and were hit by bullets while getting out of the vehicles by being targeted with sniper guns. “The security officials were targeted by sniper guns who were equipped with sophisticated weapons including night vision goggles,” Police claimed.

Talking to media SSP operation Kashif Abbasi said that DSP Sardar Hussain had reached the spot after the attack. He and his gunmen was hit by sniper rifle.

He said this is another feat of bravery by the Khyber Pakhtunkhwa as police foiled the terrorists’ plan to attack Sarband police station. DSP Badhbare Sardar Hussain and the police personnel raised the high standard of martyrdom. Terrorists attacked from different sides. Grenades, sniper rifles, automatic weapons were used in the attack. He added more force was deployed in nearby areas. A search operation had been initiated against militants, still hiding in the dark.

IGP KP Moazzam Jah Ansari’s told media that DSP Sardar Hussain and his gun men sacrificed their lives bravely. Here we all gathered which is an indication that we all are together in this war with great bravery as the police repulsed the attack of the terrorists. He said DSP Sardar Hussain parked his car at Shahbaz Khel and tried to reach the spot on foot. We had no way of seeing the terrorists.

The terrorists escaped from the site by taking advantage of pitch darkness while Police has started search operation for combing of the area within the vicinity of Police station. The two police constables who embraced martyrdom have been identified as Irshad and Jehanzeb.

He also prayed to rest departed souls of martyred policemen in eternal abode with peace and granting courage to bereaved families to bear the irreparable loss with patience. He said we stands with bereaved families in this hour of distress and added that sacrifices offered by KP police for maintaining peace would not go vain and always be remembered.

Advisor to Prime Minister, Faisal Karim Kundi has strongly condemned hand grenade on the house of Parachinar-based senior journalist, Mohammad Ali Turi and said that the Inspector General of Police (IGP) Khyber Pakhtunkhwa has been asked to submit a report.

Talking to the Senior Vice President, Parachinar Press Club on phone on Saturday, he condemned the hand grenade attack on his house and said that the culprit will not go scot free and a report regarding the incident has been sought from the KP police chief.

He said that a transparent investigation into the incident would be made soon. He said that the government will take all possible steps for the protection of journalists.