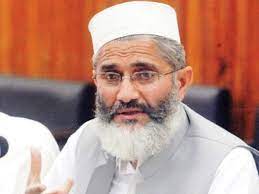 LAHORE : Amir Jamaat-e-Islami (JI) Sirajul Haq has rejected the buzz about installing a technocrat caretaker setup for a year or more as a joke and said the elections are the only way forward to put the country on track.

Addressing a press conference at Mansoorah on Thursday, he emphasized the need for electoral reforms before the polls. He added elections without reforms will worsen the crises further.

“I want to make it clear that CPEC is crucial for the development of Pakistan, and the JI is fully supporting the project.”
Residents of Gwadar had been demanding their rights even before the idea of CPEC, he said, adding the government should listen to their demands and hold dialogue with them. The JI, he said, has never supported violence in politics.

The JI chief said the country was paying the price of the ill-conceived policies of the PDM, the PPP and the PTI governments. He said the law-and-order situation worsened in KPK while the sense of deprivation among the people of Balochistan was at its peak, Punjab was facing political crises, and floods brought the worst crisis in Sindh.

Amid the overall situation, he said, the federal and provincial governments were in deep slumber. Their only concern, he added, was the protection of self-interests. The ruling elite consisted of landlords and imperialists were least bothered about the problems of the common man, he said. The mafias were ruling over the country and they lied to the people, he said.

Siraj said that the JI wanted free and fair polls without any interference from institutions. He said the Election Commission should be financially and administratively independent, and elections should be held on the principle of proportional representation. He said people must reject the tested parties and vote for the JI for corruption-free Islamic welfare Pakistan. (INP)