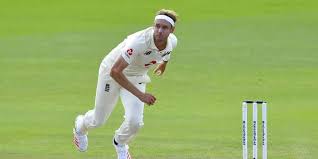 LONDON (AP): Experienced bowler Stuart Broad has been recalled to England’s squad for the two-test series in New Zealand while rising star Rehan Ahmed will not make the trip.

The 36-year-old Broad is back after missing the recent 3-0 test series sweep in Pakistan for the birth of his first child. The first test begins Feb. 16 at Mount Maunganui.

Ahmed became the country’s youngest ever men’s test cricket player when the 18-year-old legspinner lined up against Pakistan in Karachi last week and took a decisive five-wicket haul.

The tests in New Zealand are not likely to favor spin and, with Jack Leach retaining his status as first-choice, Ahmed did not make the 15-man squad with England also taking a careful approach over his development. Ahmed will play in the UAE T20 League in January.
Mark Wood, who impressed against Pakistan after elbow surgery earlier this year, will be rested from all cricket in a bid to protect him from further injury ahead of the Ashes.

England is also being careful with Jofra Archer, who was picked for January’s ODI trip to South Africa but will wait longer to return to test cricket after a long spell on the sidelines.

Along with Broad, the bowling stocks are replenished by fast bowlers Matthew Potts and Olly Stone. Potts started his test career this summer by taking 20 wickets at an average of 28 in five appearances.

Three other players who took part in England’s first test trip to Pakistan in 17 years were not included. Liam Livingstone was injured on his debut in Rawalpindi, while opener Keaton Jennings and Jamie Overton, who did not feature in the three-match series, drop out.
Essex batter Dan Lawrence joins for the first time under the leadership of head coach Brendon McCullum — the former New Zealand star — and captain Ben Stokes.