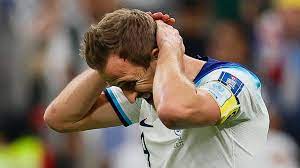 DOHA: England’s defeat to France in Qatar was watched by an average UK audience of 19.4 million viewers, TV figures showed.

A peak five-minute audience of 21.31 million people tuned in to ITV (and +1) to watch the end of the World Cup 2022 quarter-final match on Saturday.

England crashed out of the tournament after losing 2-1 to France.

Some people may have watched on other services such as ITVX, which are not reflected in the Barb rating figures.

The five-minute peak of 21.31 million was the most-watched single channel TV moment of 2022 so far.

The most-watched overall TV moment this year was during the Queen Elizabeth II’s funeral in September, when a peak audience of 28 million people tuned in.

There are several measures of TV viewing figures and broadcasters can also release statistics for peak one-minute viewing, which often reflect the highest viewing numbers.

The Three Lions were pictured looking solemn on Sunday as they headed back to the UK following their defeat.

Captain Harry Kane said on Twitter he was “absolutely gutted” after missing a penalty that would have meant England would have levelled up 2-2 to France.

He also scored an earlier penalty which took England to 1-1 after France took an early lead in the game when Aurélien Tchouaméni scored in the 17th minute.

Millions of fans have tuned in to watch England throughout the winter World Cup.

An average UK audience of 7.4 million people watched England beat Iran 6-2 in their first match on BBC One on Monday 21 November, according to Barb.

And an average UK audience of 16.59 million TV viewers tuned in for England’s 3-0 win over Wales on BBC One on Tuesday 29 November.