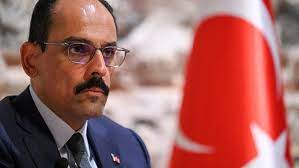 “The same terrorist organisation you support in Syria,” he wrote in apparent reference to the YPG.

The Kurdistan Workers’ Party (PKK) is designated as a terrorist organisation by Turkey and its Western allies.

Ankara has been feuding with the US and European powers about their support for Kurdish fighters in the People’s Protection Units (YPG), which it portrays as the Syrian offshoot of the PKK.

The YPG played a central role in the US-led campaign against Islamic State group jihadists in Syria. It is not proscribed as a terrorist organisation by either the US or the European Union — an issue of constant tension in their relations with NATO member Turkey.

“The same PKK that has killed thousands of Turks, Kurds and security forces over the last 40 years. Now they are burning the streets of Paris. Will you still remain silent?” Kalin wrote.

The street protest broke out Friday after a 69-year-old white French gunman opened fire at a Kurdish cultural centre in Paris, killing three.

A source close to the case told AFP that the gunman admitted to investigators that he was racist.

Some of the people who joined the subsequent protests chanted slogans mentioning the PKK.