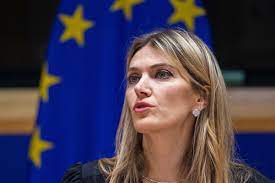 STRASBOURG (AFP): The European Parliament on Tuesday sacked one of its own vice presidents amid corruption accusations allegedly linked to World Cup host Qatar, as the institution tries to contain the scandal.

The assembly’s MEPs voted 625 to one to strip Greek socialist MEP Eva Kaili of her vice presidential role, despite her lawyer declaring that she was innocent and “has nothing to do with Qatar’s bribes.”

As the 44-year-old former TV news presenter sat in a Brussels jail cell, her colleagues in the Strasbourg parliament are scrambling to distance themselves from the taint of scandal.

The parliament’s president, Maltese conservative Roberta Metsola, called the vote after reaching agreement with the leaders of the parliament’s political groupings, amid fears the scandal will spread.

On Wednesday, a Belgian judge will decide whether to maintain Kaili and three co-accused in custody pending trial.

She was arrested last week during a series of raids by Belgian graft investigators on the homes and offices of several MEPs and their assistants or associates.

Some of these “bags of cash” were found in Kaili’s home, a judicial source said, leading a judge to conclude that, as she had apparently been caught red-handed, her parliamentary immunity from prosecution would not apply.

A Belgian judicial source told AFP that investigators believe that figures representing Qatar had been paying off European politicians to burnish the country’s image.

Qatar is a key energy supplier to Europe, and plays an important intermediary role in several diplomatic tangles, but it has also been criticized for the alleged mistreatment of migrant workers, most notoriously those who built the World Cup stadiums.

Kaili visited Qatar just before the competition and called it a “front-runner in labor rights,” to the consternation of activists and some of her colleagues. She has also defended Qatar’s quest to win EU visa waivers for its citizens.

Qatar has denied any involvement in European corruption. “Any claims of misconduct by the State of Qatar are gravely misinformed,” an official told AFP.

Kaili’s lawyer Michalis Dimitrakopoulos told private Greek television channel Open TV: “Her position is she is innocent. She has nothing to do with Qatar’s bribes.”

Asked if any cash was found at Kaili’s home, Dimitrakopoulos said: “I am not confirming or denying. There is confidentiality. I have no idea if money was found or how much was found.”

But Brussels has been rocked by the claims, and Metsola, defending the integrity of the parliament, has sought to portray the alleged bribes as an assault on democracy.

Some MEPs braced for more revelations. “I’m fearful that what we’re seeing here is just the tip of the iceberg,” warned German social democrat Rene Repasi.

Metsola also promised Qatar’s EU visa waiver bid would be sent back to a parliamentary committee for further scrutiny, delaying or derailing the measure.

Kaili was one of six people arrested in the Belgian police raids. Four have been charged with “criminal organization, corruption and money laundering” and two released.

One of those released was Luca Visentini, the general secretary of the International Trade Union Confederation, a global labor body that has pushed Qatar on labor rights.

“Should any further allegations be made, I look forward to the opportunity to refute them, as I am innocent of any wrongdoing,” he said in an ITUC statement.

The European Parliament is also expected to approve a second text calling for more transparency to deter corruption in European institutions, which will go to a vote on Thursday.